Duhs: A Dose of the Obvious

Exclusive and provocative leak of book.

In an effort to replace Wikileaks as news leaker leader, Trickyleaks, has surreptitiously issued excerpts of Jill Badonsky's book, The Muse Is In: An Owner's Manual to Your Creativity which is receiving widespread on Flitter, (the alternative social network to Twitter).

The fluts on Filtter surround the book's anticipated and somewhat controversial release, and whether the new book will match The Awe-Manac in its quirkiness or veer off into a more esoteric sphere with which the author has recently been known to dwell, (thereby appealing only to a small ingenious band of creative renegades (generally charming), who passionately believe that creativity is the answer to living a fulfilled existence and can tolerate parentheses within parentheses). The excerpts, (which were received in a large mixed-media paper bag), will be released monthly on this, The Creativity-Portal.

Jill's book is indeed designed like an Owner's Manual, this one is not for cars or cameras, but for your creativity. A few of the sections include Gizmos to Get Your Creativity Running Smoothly, Troubleshooting Creative Blocks, and a Care and Maintenance Section filled with daily prompts to make your creativity as much a well-oiled machine as possible.

This first excerpt to be leaked is from a chapter called Duhs: A Dose of the Obvious to Help You Operate With Eyes Open. Here are a few of the points from that chapter, memorize and lubricate your brain with them to calibrate more creativity.

1. Beating yourself up doesn't work as well as being fascinated by who you are and the things you do.

Constant self-deprecation works as well as hammering on a sprouting daisy when it first pops through the soil—despite work environments where intimidation and high pressure have resulted in productivity, creativity responds to positive reinforcement, inner-applause, and Hershey's Kisses. Be compassionate with yourself, creativity is fragile but on the other hand, it can express the depth of your soul in bewilderingly brave and brilliant ways.

2. Comparison is lethal in the creative process.

If you compare your efforts on a pursuit you've just begun with the efforts of people who have spent a lot time doing the same kind of thing, it will discourage you. And, WHY would you wanna DO that? Think about it. THINK ABOUT IT.

Okay, back to my indoor voice. Decide to ask yourself what inspiration you can get by being aware of the progress of others rather than making yourself miserable and discouraged. Affirm you are on your own unique path and are operating exactly the way YOU need to (perhaps with less procrastination, which will be covered in the Troubleshooting section).

You don't need to take a class, earn a degree, build an art studio, get a writing desk or state of the art equipment, break up with your boyfriend and move to New York to get started. Many people delay beginning because they think they need certain conditions, these are avoidance strategies. Each time you achieve one of these make-believe requirements you'll find some new requirement that needs to happen before you begin. Blow them off, sit in your closet without any formal education, and write a book, even if there's a party in the next room.

Easy duhs it. That's all we can release right now without fear of Running Press running after us. (That's the publisher, they're in Philadelphia). Tune in next month for more but in the meantime, go make stuff and have fun doing it, it's fulfilling. 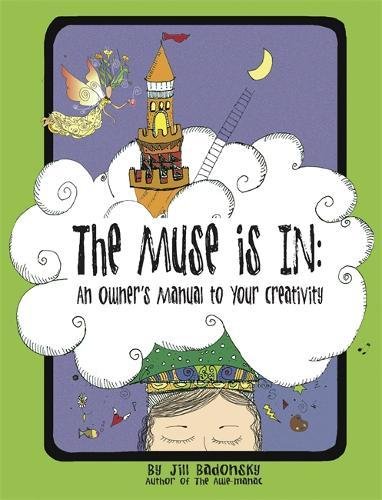 Exclusive leaks brought to you by The Muse Is In: An Owner's Manual to Your Creativity