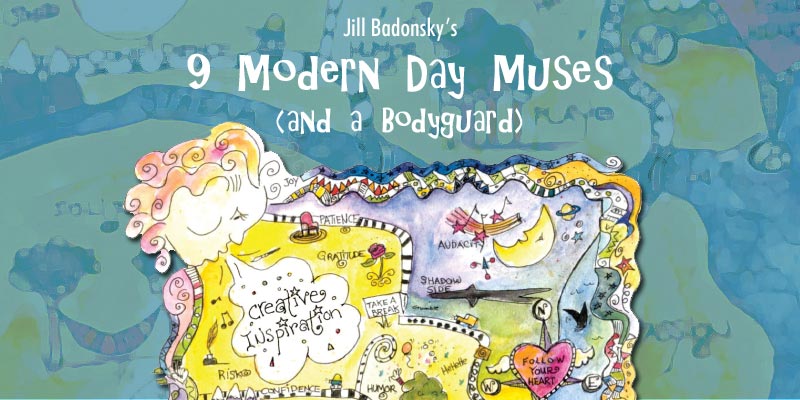 Spills: The Beauty of ImperFection

Gifts of Your Dark Side

One of my very favorite quotes about our approach to the creative process is this:

"He who hesitates because he feels inferior is being surpassed by those who are busy making mistakes and becoming superior." —Henry Link

In this feature the modern day muse Spills will share her powers of being the Muse of Process, Practice and Imperfection.

I've written on the art of making mistakes and of being imperfect in the creative process — I've made several mistakes in the course of my career, my creative process, my relationships and with a turn off I took in east L.A during rush hour. Mistakes are requirements for growth and discovery. They are rituals of initiation at the beginning of a process and scare off 80% of people pursuing a path that could bring so much joy and reward if they only allowed themselves to be imperfect. So many people really do hesitate to follow their bliss because they fear failure or cannot tolerate their own incompetence at the beginning of a process — where they are supposed to be nothing but incompetent and nonjudgmental. I find this is particularly rampant with people who are very competent in another area of their lives or would like to return to a creative arena where they were once very productive and successful. Their unrealistic expectations immobilize them.

"The creative process is non-linear. We do not traverse a straight line to our dreams but instead, encounter many surprises and new directions. Spills says, "Hey mortal, be open to where the process takes you and stay the course that's true to your heart. Striving for a perfect series of results according to calculated actions, and expecting a rigid set of images with no room for variation, is the way of damaging control. Control is not cool. It is used when you don't trust the process. If you fiddle with the process because you are rigid about what your dream must look like, you miss the signs that lead to a more penetrating dream, the one most suited to you. And you miss out on the joy of a process that is filled with the remarkable gifts of your unfolding self." Spills is fairly articulate despite being an Imp and all." —The Nine Modern Day Muses (And a Bodyguard)

So instead of making the mistake I've made before when expounding upon all the ways to bust through the blocks of perfectionism, unrealistic expectations and fear of failure, I'd like to focus on one very clear method for overcoming this challenge. This is the method that is most successful with clients wanting more creativity in their lives but who struggle with perfectionism: Lower your expectations at the beginning of a process to the point of freedom — not just in theory, in slap-happy practice. Give yourself permission to do really awful stuff... but do it. Do it a little at a time. This confounds some people who insist at being the very best at everything but you only have to be this way until the timeless flow and healthy obsession of creativity whooshes you with sweet imbalance off your feet and you keeps you going so you cannot help but reach excellence. As you get into the process, the practice that comes from the freedom of not judging yourself, the perseverance that you show that many people do not risk, will make you better and you'll rise to the top. Suspend judgment.

Use a mantra: I am suspending judgment and allowing discovery. I surrender my high expectations and trust the process. The more I "do" the more I'll like what I do. So what, I'll do it anyway. This is good... this is very, very good (no matter what it looks like or sounds like). Pick one, make up one but feed yourself messages that keep you in the process despite your feelings of initial awkwardness. Remember this quote from Fred Astaire: "The higher up you go, the more mistakes you are allowed. Right at the top, if you make enough of them, it's considered to be your style."

Adopt the habit of relentless perseverance. Let go of expectations and know that one of the fringe benefits of doing anything creative is watching for the unexpected doors that open.

"The power of mistakes enables us to reframe creative blocks and turn them around... The troublesome parts of our work, the parts that are most baffling and frustrating, are in fact the growing edges. We see these as opportunities the instant we drop our preconceptions and our self-importance." —Stephen Nachmanovitch

Q: What is Perfection paralysis? How do you help mortals break the chains and free themselves to love the process of creating, rather than merely focusing on the finished product?

A: Perfection paralysis is NOT FUN! It's also not being able to move at all creatively because there is worry about: 1) not being good enough; 2) not having everything in place or knowing everything there is to know about something before beginning, 3) not knowing how to translate an idea into reality; 4) wasting time and resources on something that may not go anywhere; 5) fears about what people will think, and a bunch of other inconvenient fears that would take up a lot of space.

To break the chains, Mortals can DECIDE to attach the qualities of joy, mirth, lightness, and mischievousness to the creative process. In doing so, the process will become enjoyable and transformative, healing and enticing. All mortals have that power, but many either don't know it, or don't practice using it. A creative process filled with joy, curiosity, and fun leads to the best results — and even if it doesn't, the process in and of itself is a reward. Mortals can continually ask themselves the question: What would make this process more enjoyable for me?

Q: When in need of your messy, accidental and imperfect brand of inspiration, how can mortals call upon you?

A: Just by starting something, with the intention of being IN the process without a care INITIALLY for how things look, sound, or are received by others. Let it be imperfect, messy, absurd, and insignificant. At the very beginning, the creative process requires lowered expectations, spiked with fun, in very tiny increments of time, in fractions of steps. It's a Muse-law, and will work every time to set in motion a glorious process flowing with joy. The single most invincible secret in helping mortals get out of paralysis that comes from perfectionism is: Lower your expectations. There is an epidemic right now in the creative pool of consciousness called Unrealistic Expectations That Seem Realistic but Aren't Really in The Get-Things-Done Scheme of Things. Notice when you lower expectations that you actually GET STARTED versus avoid your creative passion. Finishing something requires: GETTING STARTED.

Q: There's an old song about teaching the world to sing. Spills, what are you here to teach the world?

A: Mortals need to know that life can be a whole lot easier, kinder, and more rewarding if we practice endowing it with peace and joy, and share our creative nudges with the world — or AT LEAST with ourselves. I'd also like to teach them how to drive, stop throwing cigarette butts out the window, and be kind to animals and other beings. Oh, and to be a LOT MORE COMPASSIONATE with themselves (unless they throw cigarette butts out the windows and are not kind).

Q: What are some of your strategies for helping mortals keep our creative juices flowing, in the face of ruthless Inner Critics, financial setbacks, and bad hair days?

A: Just keep going saying "So what?" to the inner critic, to financial set-backs and to bad hair days. Because if you let those things stop you, you have nothing and they'll ALWAYS be something we use as an excuse until we begin using JOY and REALIZING our HIGHER PURPOSES as inspirations to stay true to the creative call. The creative process has treasures and cures for all those things. Quit taking things so seriously and notice that when engaged in the creative process you GET BETTER and when you're not engaged in it, YOU'RE CRANKY.

Q: Any advice for mortals struggling against the picky, persnickety demons of Perfectionism?

A: Instead of continually working on something because you don't think it's good enough, or stopping yourself because you don't think you're ready for whatever reason, say to yourself "IT'S CLOSE ENOUGH!" Know that discovery comes out of mistakes. Really sweet mortal attributes like patience, compassion, and grace come from staying with something despite imperfections; there is sweetness in being imperfect and being okay with it. Most mortals would rather be around other mortals who are okay with their flaws than those who hide, deny, or are embarrassed about them.

Q: Any final words of encouragement or inspiration for us?

A: A favorite quote of mine from a Mortal that I influenced is: "He who hesitates because he feels inferior is being surpassed by he who is busy making mistakes and becoming superior." That's good old Henry Link. Also I found this quote by Jill Badonsky, the Muse Channeler: "We evolve only when we participate, not when we sit on the sidelines fearing inadequacy. And the more we act, the more wisdom, confidence, and excellence we receive."

Next Muse: The Muses Hire a Bodyguard (Arnold)

This creativity inspiring series is based on Jill Badonsky's The Nine Modern Day Muses (and a Bodyguard).

Learn about the history of the Modern Day Muses in Another Fine Myth and each one individually through articles, interviews, and profiles: Aha-phrodite | Albert | Audacity | Bea Silly | Lull | Marge | Song | Shadow | Spills | Arnold (the Bodyguard) | Bonus Extras

MEANING OF NAME
Don't be afraid to make a mistake

DOMAIN
Releasing perfection, enjoying the process, knowing the power of practice and patience

THE SELECTION of SPILLS
Spills came into being purely by mistake. The Muses were playing with the attributes they thought that the next Muse should embody. They kept saying things they really didn't mean to say, but which actually seemed clever anyway. They drew blueprints with lot of fumbles, yet each blunder led to an insight, that led to a consideration of something new, that made them laugh about the serendipity of ideas, that made the process uncommon, that gave them the next Muse. "Mistakes! That's it. Oops, no, that's not it," one of them said, and then corrected herself. She had said that by mistake. Here's what was important: they were engaged in the process and not just thinking, avoiding and fearing it. The result: discovery.

The serendipity of mistakes is part of the magic of the creative process. Within the process, spills, mistakes and imperfections are a method of discovery. So Spills, the Imp was created. Since she's on the uncoordinated side of things they thought making her an imp would be endearing.

BOTTOM LINE
Life and creativity are a process to experience, not to judge. Spills, the Imp manifests her energy as the inner part of us relishes the discoveries that take place in our imperfect approach to the world. We evolve only when we participate, not when we sit on the sidelines fearing inadequacy. And the more we act, the more wisdom, confidence and excellence we receive. Trusting the process leads to peace and contentment. Release impatience. Dive in, you will rise to the top. Instead of focusing on the final product ask yourself how you are becoming a better person by immersing in this divine process.