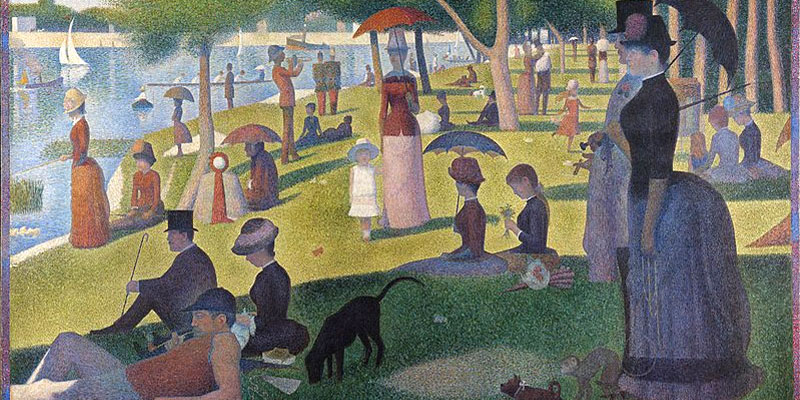 Visual Elements and Principles of Design

Appreciating 'A Sunday on La Grande Jatte' and 'Bird in Space'

In an art appreciation course I was given the task to compare and contrast two pieces of famous art. Critera included viewing one piece in person at an art gallery and another online and report my subjective findings on the visual elements, principles of design, and differences of my experience viewing the art in each way.

For my in-person piece, I went to Chicago's Art Institute to see Georges Seurat's iconic painting, A Sunday on La Grande Jatte. Next, I found Constantin Brancusi's cherished series and piece, Bird in Space online. Following is my subjective findings and perception of each artwork.

Georges Seurat: A Sunday Afternoon on the Island of La Grande Jatte (1884) 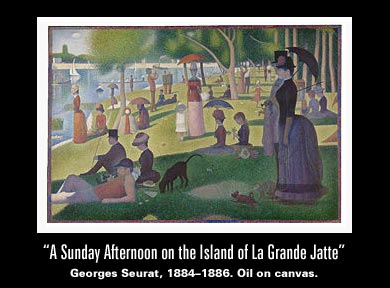 Initial reaction: I was impressed by the size of the painting (81 ½ X 121-¼ in.). I was amazed at how the colors and texture of the picture gave it a sense of being "alive" as I viewed it in the gallery. I chose this painting to write about because I was interested in learning how Seurat used the technique of Divisionism, (also called Pointillism) to compose an entire painting. I was also interested in seeing how he used this technique to achieve what is described as optical color mixture —- where different dots and dabs of color blend in the mind's eye to create new color sensations more vibrant than the actual pigment used.

The association I make with La Grande Jatte is of Impressionism style painting because the further away from the painting you stand, the clearer and more refined it looks. Seurat's painting differs from the Impressionism style familiar in his day (such as Monet's Waterlillies or Caillebotte's Paris Street: Rainy Day) in that he made his Impressionistic style more controlled, defined, and detailed.

La Grande Jatte depicts a leisurely Sunday in the park for local contemporaries in the outskirts of Paris. In his book Greatest Works of Art of Western Civilization, Thomas Hoving describes it like this:

"The panorama of humanity on a busting Sunday on the island of the Grande Jatte in the river Seine, … is transformed from some curious ode to science into a penetrating image of living human beings." (Hoving, 166)

Interpretations of the painting range from scandal to satire. The Art Institute notes:

"'Bedlam,' 'scandal,' and 'hilarity' were among the epithets used to describe what is now considered Georges Seurat's greatest work…. In recent years some have commented that the content of the painting depicts 'Not as a decorous Sunday promenade but as a place of encounters among prostitutes and clients….'" (Seurat, 176)

Still, others suggest Seurat is using humor and satire to mock the pretentiousness of the characters, and expressing his own interpretation at the stiffness and uniformity of fashion. One other observation is of a dialogue of cohesion and separateness of the characters in relationship to one another.

"Seurat's pictorial pattern … is tantamount to actual social conformism; the stiffness and psychological isolation of the figures, however, argue for disjunction … Seurat's people assume roles in a collectivity, yet because they seldom communicate with one another, their actual isolation is revealed." (Seurat, 177)

Color: Color is the primary visual element in this painting. Applying his scientific understanding of light and color, Seurat used dots, dabs, and strokes of primary color pigment (red, yellow, and blue) to compose the forms on the painting. An effect referred to as optical color mixture is produced as the eye blends the colors to create new ones when viewed from a distance.

Texture: Through the layering of the dots and dabs of paint, Seurat created an actual texture on the canvas you can touch. The texture is not thick, but it enhances the effect of the color and vibration of the picture.

Line: La Grande Jatte has strong horizontal and vertical lines throughout the painting. The upright trees and erect forms of the people standing create the vertical lines. The people's shadows and direction they face (sideways), as well as the boats in the river and landscape create the horizontal lines.

Depth: Seurat achieves depth in this painting through the use of one-point linear perspective. The vanishing point is on the right hand side of the painting-pulling the picture in towards it.

Proportion and Scale: Most the elements in the painting are in proportion and scale to one another. There are a few places in the painting where this is slightly off, however. For example, the fisherwoman by the river is on the same plane with the central mother, but she only comes up to the mother's shoulders. Also, the seated man in the top hat, if standing, would only reach the waist of the promeneuse on the right.

Balance: The picture has an asymmetrical balance.

Unity: Through the horizontal and vertical lines, there is a geometric harmony and unity in the painting.

La Grande Jatte captures a satirical snapshot of what life would have typified on a Sunday afternoon in 1885 for the local middle class people on the island, so I consider the style abstract. Historically speaking, "Seurat began this painting in 1884, finished it during the winter of 1885-86, working on the island of the Grande Jatte, and exhibited it from May 15 to July 15, 1886, at the last Impressionist group show." (Hoving 166) The painting style was considered Impressionism at the time, but is now referred to as Neo-Primitivism. The materials used were the common oil pigments (and canvas) used by the artists of his day. 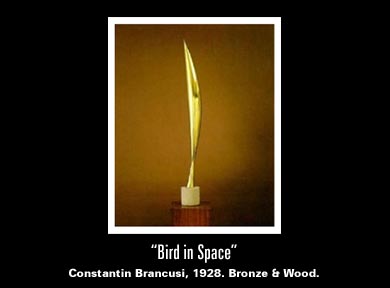 Initial reaction: I was attracted to the simple form and abstract quality of the sculpture, and I enjoyed interpreting the essence of the bird and flight. I chose this piece to write about because I wanted the opportunity to analyze a different kind of work other than a painting, and I wanted to take the opportunity to get to know Brancusi's work better.

The associations I make with Bird in Space range from interior decorations for the rich-to appreciating that even the essence of something can be depicted in such an artful way. I was intrigued to learn that this sculpture was the source of controversy in the early 1900's-and at first was not considered "art." The Guggenheim Museum Web site reports what happened as a result of the controversy:

"A historic trial was initiated in the United States to determine whether Brancusi's Bird in Space was liable for duty as a manufactured object or as a work of art. The court decided in 1928 that the sculpture was a work of art." (Guggenheim, 2002)

Brancusi once said, "All of my life I have sought the essence of flight. Flight! What bliss!" (Ross, 2000) It would seem that he did indeed achieve this through the creation of this sculpture. However, Bird in Space is much more than a sculpture with a "stout base, a diminishing waist, and then an expanding shape on top" (Hoving, 136). It portrays an elegant uplifting form representing the essence of a bird in flight. Brancusi further expressed this message by creating Bird in Space in a vertical form, in a soaring motion reminiscent of flight. And just as birds seem almost weightless as they fly through the air, the reflective polished bronze surface adds a lot to the form's weightless quality. I am very much in agreement with Hoven's description at how one may feel when they see this sculpture: "…One is immediately lifted into the air, both mentally and physically."

Visual elements of Bird in Space:

Color: The color of the sculpture comes from the natural colors of the materials used: wood, marble, and bronze. The reflective quality of the polished bronze also reflects the color of other objects near it.

Texture: The smooth texture of the sculpture comes from the materials used (wood, marble, and bronze) and is actual texture we can touch and feel.

Line: There are several types of lines depicted through Brancusi's sculpture. The geometrical shapes on the base and neck create horizontal and vertical lines. The lines on the elongated cylinder for the bird are curving (even flowing) lines.

Principles of design of Bird in Space:

Balance: Depending on your viewing perspective, Bird in Space could have symmetrical or asymmetrical balance.

Unity: Unity is achieved with Bird in Space because it has the appearance of oneness — it is solid and together.

Brancusi created Bird in Space in 1928. At that time, artists created sculpture in more representational forms like human forms and objects from nature. After making sculptures in the style of Rodin (and declining an offer to work as his assistant), Brancusi developed his own style of sculpture-known as abstract sculpture that changed the way people thought about form and space. Bird in Space is more abstract than non-representational to me because I see the essence of a bird in flight, along with the beak, body, and feet of the bird.

Initially, this sculpture was carved in marble and may have been one "in a series of seven sculptures carved from marble and cast in bronze" (Metropolitan Museum, 2002). Even so, the materials in the final form (bronze, wood, and marble) were all common materials being used by sculptures in the early 20th century. The subject matter relates to the timeless nature of birds and Brancusi's own desire to seek the essence of flight.

Conclusion: A Contrast and Comparison of Two Works of Art

The content of La Grande Jatte also differs from Bird in Space; it is a satirical depiction of the life Seurat knew, while Bird in Space is even more abstract, and perhaps more of a personal and even spiritual experience to the viewer. Finally, when first created, La Grande Jatte was in fact considered art, but Bird in Space was not immediately accepted and had to go to trial to establish it as such. Incidentally, both works of art were created within 44 years of each other.

My experience with viewing the objects in either a museum or on a Web site was very different. Viewing La Grande Jatte at the Art Institute gave me a much deeper appreciation for the painting than when I viewed it in a book or on a poster. I could observe more true detail at its full size-as Seurat meant to be viewed. Conversely, viewing Bird in Space on a Web site or as a picture in a book did not give me the complete experience of viewing the piece. Being a three-dimensional sculpture, it should be viewed from all angles in real life. The experience would have been more complete and meaningful if I saw the sculpture in a gallery, which I hope to do some day.