This illustrious award is given annually to select Web sites in eight categories ranging from creativity and writing advice to agents and publishing/marketing resources.

In 2015 Kara Gebhart wrote, "When we started compiling this list 17 years ago, our goal was to introduce writers to the bevy of resources taking root on the vast Web that was revolutionizing the world as everyone knew it. Today, that Web is a bigger part of our lives than we ever imagined — and this guide has evolved into an essential tool to help you determine where and, perhaps, more important, how you spend your time linked to cyberspace, from the blogs you browse while eating lunch at your desk to the social networks that ping into your smartphone."

When we first received the '101 Best' award in 2005, we were deeply honored. Each additional year we received the award renewed our commitment to keep working hard at inspiring and motivating writers at every level with our expert advice, imaginative prompts, and creative exercises.

In accepting this honor, we also thank our collaborating authors, teachers, coaches, and creative professionals who work with us to make our site a valuable resource where visitors can productively 'make the most of their time online.'

Details for each year we've received the award follow.

May/June 2018: "The countless prompts, how-tos, on guided imagery and creative habits, mixed-media masterpieces and more at Creativity Portal have sparked imaginations for more than 18 yars. To get your ideas flowing, start with the Imagination Prompt Generator or photos from the Old West Bird Cage Theatre." 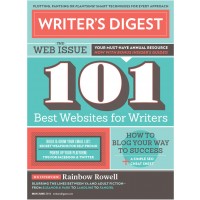 MAY 2016 / Best of the Best: "A staple on our list, Creativity Portal — packed with insightful interviews, free projects, and an Imagination Prompt Generator — encourages out-of-the-box thinking for writers, children, and educators alike."

MAY/JUNE 2015: Kara Gebhart writes, "We've extensively vetted the best of the best online hubs, visiting every one of the endless stream of reader nominations we've received over the past year, taking into account past lists and including staff favorites. The sites we've chosen offer an abundance of resources, most of which are free."

Creativity-Portal.com is listed in the #1 spot under the creativity category with icons indicating our social media presence.

WD writes: "Chris Dunmire's Creativity Portal inspires with how-to articles and exercises focused on brainstorming ideas for your work. Be sure to check out the Imagination Prompt Generator. Parents and educators should look for the articles on fostering children's creativity."

MAY/JUNE 2014: Writer's Digest has named Creativity Portal on their annual 101 BEST WEBSITES FOR WRITERS list! We're honored with an extra bonus — a 'Best of the Best' callout, for the first time, the #1 spot in their creativity category for 2014.

WD writes: "Spark your imagination with the Creativity Portal. Alongside how-to articles and exercises focused on brainstorming ideas for your work, check out the site's Imagination Prompt Generator, Travel Adventure Writing Prompts, and 100 Creativity Interviews section."

The article The 15th Annual 101 Best Websites for Writers by Tiffany Luckey, with Ophelia Thomas opened:

“According to the Indexed Web on WorldWideWebsize.com, there are currently more than 14 billion Internet sites — which explains why it’s such an impossible task to scour them in search of the jewels that are most valuable to the writing life. That's where we come in.

"For a decade and a half, we’ve been busy doing the legwork for you, combing through seemingly endless streams of websites that target writers and highlighting the very best in our annual roundup so you can spend more time doing what you love: Writing."

Thank you, Writer's Digest! We are honored by this recognition and amazed to be 'one of 14 billion Internet Web sites' worthy of your award, which truly belongs to our entire community of amazing collaborators.

Thank you to everyone who has nominated our site and to Brian Klems and the WD staff for listing Creativity Portal #2 in the Creativity category this year encouraging writers at all levels to "Enjoy photo prompts, creative writing exercises, and how-to advice to help you generate ideas for your work."

APRIL 25, 2006: Creativity-Portal.com has been chosen by Writer's Digest magazine as one of the "101 Best Web Sites for Writers" in their creativity category for 2006. Creativity Portal has been included in the yearly guide published on the Writer's Digest Web site since 2002.

The 2006 (eighth annual) guide of "great writing sites worth your time and attention" published by Writer's Digest has six categories: creativity, general resources, genre/niche, just for fun, publishing resources, and writing sites. The 101 Web sites included in the May 2006 print issue article by Robin M. Hampton were chosen as the most valuable from 1,400 votes.

www.creativity-portal.com
For a quick writing prompt, use the push-button prompts. You can also try some craft projects or just enjoy the online comic strip.

May 2005: Creativity-Portal.com: Visit this site for arts-and-crafts article ideas and stay inspired with its writing prompts.