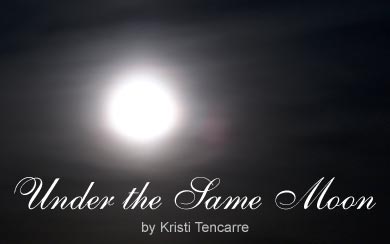 Under the Same Moon

I wrote this story in 2007 for my friend's daughter Kendra before her Dad deployed to Afghanistan. Kendra was very angry; it wasn't her Dad's first deployment and she knew she was going to miss him. Her mom wanted something to read to her daughter to let her know it was okay to feel angry. She couldn't find a story that showed an angry child working through his/her feelings so she called me up and asked me to write a story for Kendra. After she read it, she actually asked me to go back and make the child angrier! :-)

My hope is that this story can help children work through their feelings while their Mom or Dad is deployed.

Under the Same Moon (Daddy version)

Under the Same Moon (Mommy version)

There are a few scenes in the story that I took out of real life. When I was in Iraq, I worked with a soldier whose buddy actually threw teddy bears out the chopper to the kids below who ran in the shadow of the chopper. The scene of the soldiers sitting around talking about their kids at mail call actually happened too; that was the only time I ever saw one of my friend's get choked up — when he talked of his son. Although in the story pictures are passed around, in real life, no one showed pictures, as soldiers can be pretty superstitious about that.

The title of this downloadable book "Under the Same Moon" (Daddy version, Mommy version), was inspired by something my Dad told me each time I left home for work or travel: he always reminded me that no matter where in the world we both were, we were looking at the same moon. He always said that when it was full, then he was looking down on me. Looking up at the moon and knowing that my Dad was doing the same thing brought incredible comfort to me as I worked and traveled in places far from home.

My hope is that this story can help children work through their feelings while their Mom or Dad is deployed. Anger is just one of the many emotions we have. It gets labeled as a "bad" emotion because if it's not dealt with it can have negative consequences. But it's one of the emotions in the Grief Cycle and having a parent go to work in a war zone can be scary for a child — there's more risk than Mom or Dad taking a job in another city. There is a grieving process involved when your parent is no longer living under the same roof, even if you know it's temporary and that there's an end date.

"I found it hard to discuss with my daughter, when my husband was first deployed, her anger and pain at him leaving. It is nice to have a workbook and storyline to use with her and now her younger sister on their father's new deployment. Many of the current publications by MFRC for military kids fail to help in working through the fairly heavy emotional waves that come with a parent being deployed. Kristi, whom I approached back in 2006 about a book of this nature, has done a phenomenal job in showing the emotional grief and journey as well as assisting this aged range of child in finding activities to help overcome and work through the pain of that separation. It is truly with great appreciation and thanks that we will be making use of this workbook during my husbands deployment this year."

Next: It's All Write: On Finding and Expressing Your Words

Under the Same Moon: For Deployed Parents

It's All Write: On Finding and Expressing Your Words

Mad Genius: In Love with a Creative Passion

Your True Self: Who Are You Really?

A Fresh Start: Celebrate the Person You Truly Are!

Beauties Yet Unborn: Your Creative Birthright

Mission: Creativity! It's Worth Fighting for