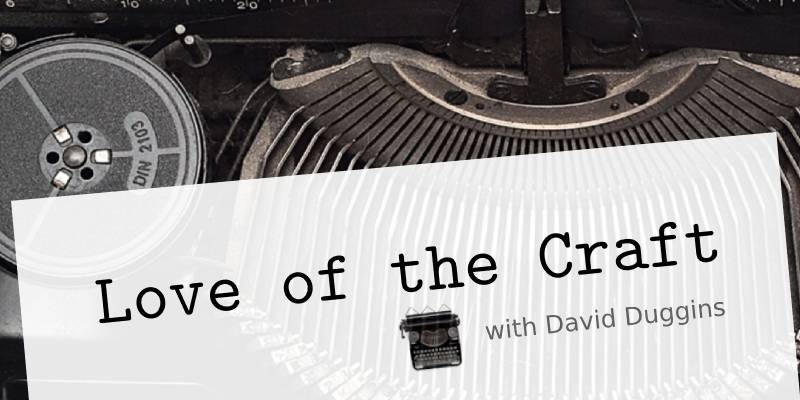 Hello again, Creativity Portal friends! I hope all of you remain happily creative — although my column here has always been about helping folks who are experiencing troubles in their creative lives.

Since I'm writing my first column in more than a year, it seems appropriate that I write about beginnings — the blank page, and the first words that grace it; the blank canvas, and the first tentative sketches; the block of stone before the first stroke of the chisel.

Forgive me for stating the obvious: We all hate starting something new. It's scary. We don't know what's going to happen. We pressure ourselves. We want our work to be good — even great. I taught guitar lessons for twelve years, and the single most common problem my students had was getting started.

It's understandable. They knew they were going to sound terrible. They knew that their progress would be slow, that it would take them a week or more to learn the fingerings for three chords, and then change chords smoothly. They saw time as an enemy — a weighted block on an incline. Pushing uphill all the way. This idea discourages a lot of people from ever trying anything creative.

Here's the good news: It's based on an idea that simply isn't true. The idea is that imperfection is failure. That we have to be good at the things we do — great at the things we do. And we want to do that straight out of the gate.

Folks, it just ain't that way.

The act of creation is a process. Even when the muse is fully cranked and firing on all cylinders — when you get the entire song in one brilliant instant, the entire story in a flash while riding the subway, the mental image of the painting down to the finest detail — you have to take that idea home to your studio and get your hands dirty to make it real. That takes time. Sometimes it requires learning new skills, or developing old ones. That takes even more time.

The controlling element is attitude. Attitude is neutral. It has no particular charge, positive or negative. But it is absolutely loaded with potential energy, ready to flash out and pour itself into whatever you are about to do.

The trick is to simply accept whatever it is you're about to do, and accept it for what it is. It's a pretty Zen kind of concept, and difficult to grasp for those of us raised and nurtured in the Western ideal. I'm a product of the East Tennessee public school system. I'm a product of Western culture.

Ecclesiastes tells us there is a time for all things. There will be an appropriate time for that hard-work, not-done-until-it's-perfect ethic — even in a creative life. But a beginning is not that time.

There is a spiritual universal, found in every religious practice. Simply stated: Beginnings are perfect.

I tend to pull a lot of my examples from Eastern philosophy, but as a decidedly non-partisan scholar, I'm delighted to find a great example in a story most Westerners know very well.

In the beginning, God created the heaven and the earth.

Most of us know this one, don't we? Don't be alarmed; I'm not here to preach, from either a Zen or a Christian standpoint. I use this as an example of the attitude to cultivate when you're starting something new.

At the risk of sounding blasphemous, God doesn't create the whole kit and kaboodle all at once. It took a little while (exactly how long is open to very broad interpretation). On the first day, he created light, separated it from the dark, and called it good. Literally. And that is how the rest of the creation story was written. After each task, on each day, God looked over what he had done and saw that it was good. He didn't judge it. He wasn't discouraged because he didn't get around to making the firmament and now it's too late because the kids need a ride home from soccer practice. He did what he did, and it was good.

Did he sweat it? Nope. It was good. Because beginnings are good. Always. The work is good, for and of itself.

Beginnings are perfect, no matter what your ideology. A beginning is a little miracle. It is something from nothing. You cannot go wrong. Just start.

I just looked back over this article and saw that it is shorter than what I usually write for the column. If I add words simply to boost the word count, it will not be as true as it is now. So I'm going to leave it this length. I'm calling it good. The Westerner in my head says, "You need to do more work than that. You haven't done enough yet." But my deeper self knows it's good.