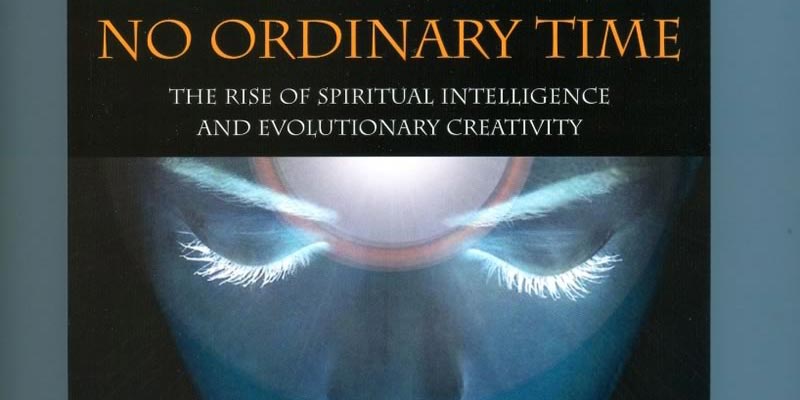 The threshold we're at right now is a precious one.

An excerpt from No Ordinary Time: The Rise of Spiritual Intelligence and Evolutionary Creativity
by Jan Phillips | Updated September 2, 2018

Once, in India, I was on a train riding in a Ladies Compartment with three women and two children. We had plenty of extra room. When an elderly woman and her daughter appeared in the doorway, I motioned for them to come in. The other women in the compartment seemed perturbed, pursing their lips and shaking their heads with tight little movements. No one moved over to make room. Instead, they cast their eyes down and pretended not to notice the two women looking for seats.

Finally I stood up and took the older woman's hand, leading her to my place on the bench. There was only room for one, so she sat on the floor and motioned for her daughter to take my seat. Leaning toward me in a gesture of appreciation, the two bowed their heads and joined hands, never looking at the women who'd rejected them.

Wanting to make up for the rudeness of the others, I took out my camera and asked if I could I photograph them. They nodded, and I began to shoot — the mother's head on her beautiful daughter's lap, the protective arm on the shoulder, four eyes looking into me with weariness and wonder. I shot and shot, honoring them, thanking them, loving them. Our intimacy grew with every exposure.

Though I could not speak their language, kinship glimmered in their deep dark eyes. Through smiles and expressions, they offered me something of their essence, their inner light. And I gave back my own form of light, an adoring eye, a gaze wholly focused on the radiance I perceived. Whatever distance there was between us disappeared in those moments of complete attention. We were no longer separate parts; one existed where three had been before.

As a result of that connection, something shifted for the other women in the compartment as well, a subtle opening up, a moving toward. The women who had witnessed this encounter rearranged their bags and created more space for the mother and daughter. They opened up their lunch baskets and passed out dosas and fruit, handing portions to me and to the mother and daughter as well.

After our snack, I left the compartment and walked down the aisle to the train's open door, stretching out as far as I could into the hot, humid monsoon air. In a few minutes, the woman and her daughter appeared behind me and sat down on a bale of hay across from the door. They looked up at me smiling, and I sat down on the floor and took the mother's hand in mine. She leaned over and touched my face, stroking it like a mother would a child The daughter reached out for my other hand. As the train rolled on down the dusty track, we lingered there on the bale of hay, holding hands, rubbing palms.

The next stop was theirs. The women tugged on my arm, begging me with motions to come with them to their home. I was sorry I couldn't, but I had to be in Delhi the next day. As the train pulled away, I hung out the door waving until they were two tiny figures in the golden light.

Shortly after I returned to my seat, a porter arrived with a bottle of Campo Cola and a huge fresh orange. Gifts, he said, from the mother and her daughter. Though I thought no one in the cabin spoke English, one of the women said to me, "They were Muslim, you know. We do not associate. There is a war going on right now in the Golden Temple between Muslims and Hindus. A terrible massacre." It was then I realized what a social faux pas I had made, due to my ignorance of the culture. I nodded my head with a serious look on my face, taking it all in, reflecting on what unfolded, and ultimately, I was happy that I had made space for them, happy that we formed our little holy trinity on that bale of hay in the hallway. In this case, ignorance was bliss.

The threshold we're at right now is a precious one. The whole world is in our hands, and every one of us has the power to act consciously or not. If we do, what will change is us, what we'll save is ourselves — and what will happen in turn is a deepening of our joy, our sensibilities, and our relationship to whatever we cherish.

I am an activity of the cosmos.
My life is a wild seed come to bloom in the soil of time.
I am intelligence ever-expanding
thought ushering forth from Mind-at-Large
A ray of light from the Original Source
I am the Great One taking shape in human form.
I am a chalice for the Holy Wine.

"The time of the lone wolf is over. Gather yourselves; banish the word 'struggle' from your attitude and vocabulary. All that we do now must be done in a sacred way and in celebration. We are the ones we've been waiting for." — Hopi Elder, Oraibi, Arizona

Next: No Ordinary Time Interview with Jan Phillips

'No Ordinary Time' with Jan Phillips


Creativity and the New Cosmology
Homo Sentiens: Honoring Creativity
Once, in India