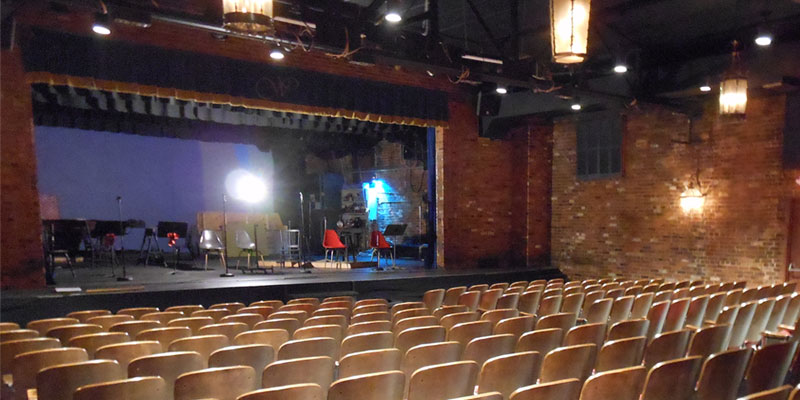 An Inside Look at Freeport's Winneshiek Players 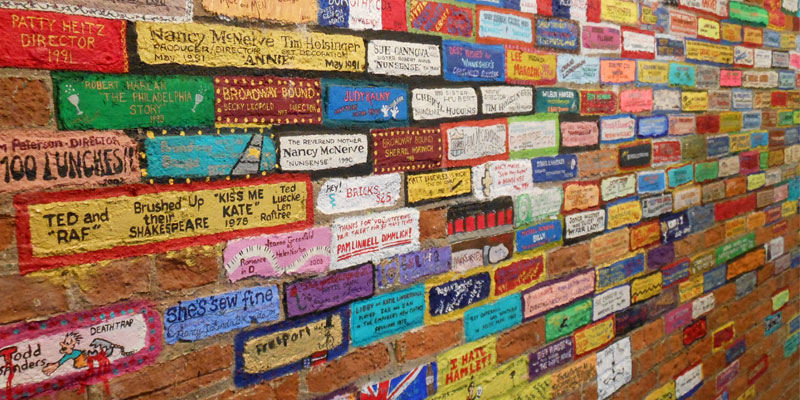 Nearly 100 years ago, Jules Verne’s 1916 French silent film 20,000 Leagues Under the Sea played quietly across the big screen in a Chicago movie house. 115 Miles away, a lively stage production of George Bernard Shaw's comedy Arms and the Man roared with sound and laughter at the Orpheum Theater in downtown Freeport, Illinois.

The performing group of Arms eventually went on to become the Winneshiek Players, settling into their own Playhouse on Clark Street in 1936. Since then, the all-volunteer troupe has put on live shows for the enrichment of the entire community, in what they believe is the nation’s oldest, continuous amateur theater.

Winneshiek Players got its start in small gatherings in people’s homes. “The history of it is truly amazing,” says Mark Jansen, vice president of the board of directors, and director of adult education programming at Highland Community College. “It started out as kind of a social gathering that used to occur in people’s homes, and dramas that would be staged in people’s very large living rooms.”

Winneshiek Players is proud of its grassroots beginnings and presence in the community. “It’s very much our collective thought that arts enhance our lives,” Jansen says. “Without the arts, our lives would be pretty flat and gray.”

All roles are important at Winneshiek, from the people who buy tickets for a performance, to those who perform onstage or work behind the scenes. Membership, ticket sales and financial gifts are the primary means of support for the theater, which welcomes participation from anyone, Freeport resident or not.

“There are very few of us who actually have a trained theater background,” says Jansen, who’s done every job in the theater, from directing to cleaning toilets.

If you have a special talent or interest, Winneshiek will find a place for you. Discovering various hidden talents in people is one of the joys of community theater. In a recent production of Same Time Next Year, Jansen worked with Lucy Roloff, a nurse with FHN health system.

“Lucy has an amazing perception of period pieces, as far as properties and costumes,” he says. “She came in and said, ‘This piece will work … no, this piece won’t work … let me go to my wardrobe and see what will work.’ It was like, ‘We know Lucy, but we didn’t know that part of Lucy.’” 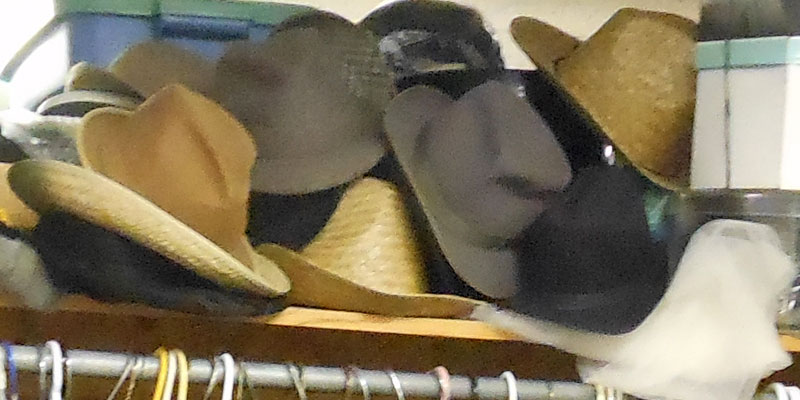 Likewise, it’s fun to see new talent show up for an audition.

“There are the people who we typically see at every audition, but there’s also always a new gem or two,” Jansen says. “They’re either new to the community, or there’s been some change in their lives that’s opened up some time, and they just walk through the door, having never been on stage before, and light up an audition.”

While it’s exciting, the unknown can be a little scary for a director.

“It kind of makes us tense to cast new people, because it’s all new to them – you never know what they can do, what’s going to happen when there’s an audience out there,” Jansen admits. “But our audience really enjoys seeing those new people come across the stage.”

The bright lights of live theater attract a lot of creative types, as well as doctors, educators, lawyers and other professionals. Many find their way to Winneshiek through someone they know. 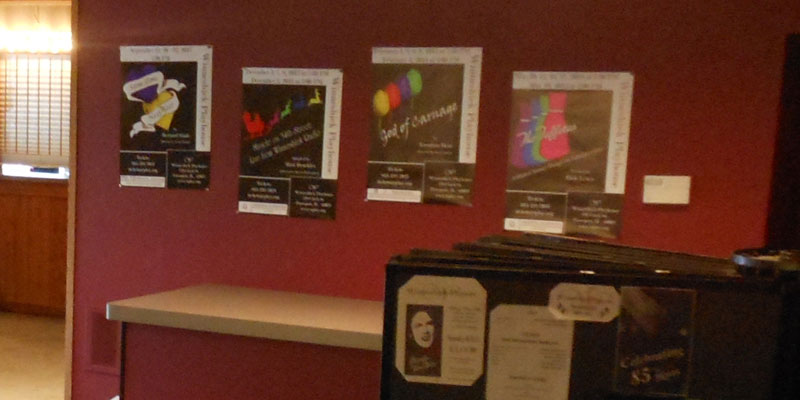 “I was introduced to the theater through my high school theater director,” Jansen says. “He got a lead role in a musical and they needed help backstage, so I came down to help, then got involved in building sets.” One thing led to another, and in October 1979, the same year Jansen graduated from high school, he directed his very first show, The Passion of Dracula.

Jansen’s colleague and friend, Tana Gundry, who also works at Highland Community College, in human resources, has always had a passion for the arts, theater, film and music. Before moving to Freeport from Chicago, she worked in several non-equity theaters, in stage management/production management, while attending film school at Columbia.

“I developed a real passion for theater, so when I moved to Freeport, I knew that Winneshiek was a really strong presence in the community and had been here awhile, and really provided an artistic outlet,” she says.

Gundry got involved with Winneshiek during a benefit performance of The Vagina Monologues (TVM).

“I was pretty excited when I heard about TVM being performed as a benefit for Voices Domestic Violence,” she recalls. “They were going to do a staged reading for two nights as a fundraiser, so I went down to the theater and auditioned for that play because I thought it was such an important piece to bring to the stage, and especially for our local community. I was actually cast in the play.”

Once Gundry was involved in the theater production and saw how things worked from the stage side of things, she wanted to do more.

“I realized that, hey, I’ve done some backstage things, and I’ve directed in Chicago, and I’d be interested if Winneshiek were ever looking for directors or other creative talent,” she says. “I’d love to help out because I think it’s such an important thing in the community. I was asked by the executive director of the Voices agency to direct the next staging of TVM.”

To encourage more people to get involved with community theater, Winneshiek has hosted open houses to allow visitors to get a behind-the-scenes look at what goes on behind their mysterious gray door and training sessions for aspiring directors and tech crews.

“We’re here not only to provide a resource for those individuals who enjoy or want to experience live theater, but also to provide an outlet for those who may have loved being onstage in high school or college,” says Jansen. “This is an outlet for people to let their creative things go.”

The rewards of being involved with Winneshiek are many. Gundry enjoys the unique relationship she’s developed with the actors through directing. “Even a year or two after the fact, like with TVM, I have this bond with all of the women that I shared the stage with the first year and then directed the second year.”

“I know that I wouldn’t be employed in the field and in the position I am if it weren’t for my theater teacher introducing me to theater at a high school level,” Jansen says. “And I can, without pause, say that many of my leadership skills and all of my public speaking skills were honed in this building and in my high school theater department.”

Jansen adds, “I started college as a performing art scholar, and it was my goal at age 18 to go into theater, become a theater designer, make it big on Broadway and go to New York City and do all those things. None of that happened, but all of the theater stuff happened. I mean, I’ve never stage-managed a Broadway musical, but I’ve stage-managed on every stage in Freeport. So the release, the artistic output, of being involved in theater has happened for me.” 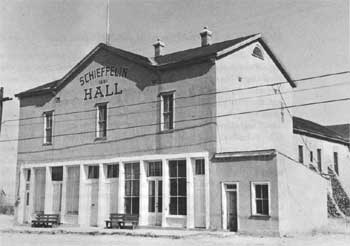 The Allure of Historic Buildings in Community Theater

Artists, writers, and performers express their inner worlds of imagination through executing a work of art, publishing a piece of writing, and acting out a play for an audience of individuals who each interpret such work through their own lens. Part of the delight of spectatorship is having one's own relationship to the work (a painting, book, or play) and exploring meaning in light of personal experience and current seeking space. The seasoned artist must trust this yin-yang circle of release and completion.

Having attended productions at a number of community theatres including Winneshiek Playhouse in Freeport and Woodstock Opera House in Woodstock, llinois, I find part of the charm of the experience is simply being inside the historic buildings themselves, many which functioned as multi-use structures since the 1800s. This is as close as I can get to time traveling.

Built in 1889, the Woodstock Opera House was part of a building that "functioned as the center of activity for Woodstock and McHenry County. The City offices, library, police and fire department occupied the first floor of the building and the Opera House was contained in the second and third floors (1)."

The Opera House initially hosted traveling companys like vaudeville and had flexible space for additional kinds of events. "With a capacity of almost 700 movable seats the Opera House functioned as a public space for a variety of activities including, theatrical events, concerts, weddings, dances, wrestling matches, the annual strawberry festival and graduation commencements." 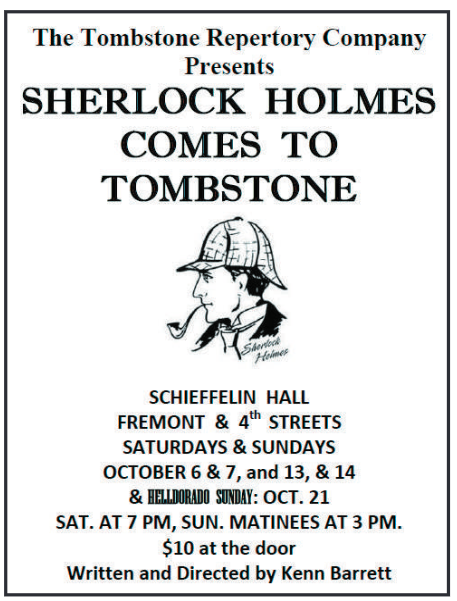 Recently, I attended the opening night of Sherlock Holmes Comes to Tombstone by the Tombstone Reperatory Company at Schiefflin Hall in historic Tombstone, Arizona. The production was written and directed by Kenn Barrett who was in character as Wyatt Earp as the Master of Ceremonies between acts.

Schieffelin Hall was built in 1881 for the town's founder Ed Schieffelin in the famous mining boom-town 'too tough to die' known for the Gunfight at the O.K. Corral and Boot Hill cemetary which three of the perished are buried. Situated on Gird Block in the same location on the corner of Freemont and 4th streets for 138 years, the historic landmark was "constructed a 'first class opera house' for the citizens of Tombstone (2)."

In its heyday, Tombstone was a popular destination for touring companies and Schieffelin Hall "became the largest, most elaborate theatre between El Paso, Texas and San Frascisco, California. [...] The seating was 450 on the parquet with a gallery capacity of 125. The drop curtain, a Colorado scene, was considered a work of art. The building became the hub of entertainment and social events in Tombstone (2)."

Still functioning as a multi-purpose building, the auditorium at Schiefflin Hall seats attendees on church pew-like benches welcoming the break of intermission in the rear (actually, refreshments in the lobby at the front of the building, but the benches are hard on the behind).

Imagine the dynamic energy lingering in this century-plus space that's both entertained and hosted multi-generations of troupes, community members, and families between its walls. Stepping into the lobby of Schieffelin Hall is authentic time travel to the past inside a container spilling over with the vitality of past actors, performers, and spectators whispering through the ages. On a still night, one might still hear roaring applause and laughter echoing down Freemont Street. Not to mention the Masons — the building still hosts the town's Masonic Lodge (King Solomon Lodge #5) upstairs which has rostered decades of members including Wyatt Earp.

Another favorite entertainment spot in Tombstone, Arizona, still standing today is the Bird Cage Theater where the town's more casual entertainment took place for miners and gamblers at the corner of Allen and 6th Streets. Bird Cage has its own curious history and rich lore — a guaranteed treasure-trove one can mine through writing prompts and other research when curiosity strikes.