Engaging practices for artists, scientists, inventors, and others on the creative path as modeled by Leonardo da Vinci. 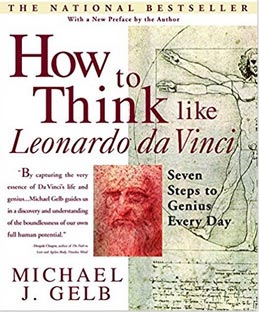 Famously known for his mischievous Mona Lisa, Leonardo da Vinci was not only a great artist, but a scientist and inventor as well.

Da Vinci's creative genius is chronicled through his art and journals and research reveals him to be a true Renaissance man and far ahead of his time, inspiring generations of creative thinkers, artists, inventors, and innovators.

This engaging series is based on the seven timeless principles explored in Michael Gelb's How To Think Like Leonardo da Vinci: Seven Steps to Genius Every Day, and delves into da Vinci's methods and habits related to his creative explorations and inventive accomplishments with practical advice on applying the principles to better develop and enhance your own creative life today.

Arte/Scienza: Using Both Sides of Your Brain

Leonardo da Vinci made the most of using the left- and right-sides of his brain, inspiring today's use of mind mapping techniques.

Sfumato: Being Open to Experience

Leonardo da Vinci's genius was enhanced by his willingness to be open to anything and embracing ambiguity, paradox and uncertainty.

Leonardo da Vinci jumped right into the moment of his experiences (where the real power of now is), challenging long-standing beliefs and opinions.

Corporalita: Taking Care of Your Body

Leonardo da Vinci knew his body was a strong house for his creativity and took care of it by practicing the cultivation of grace, ambidexterity, fitness, and poise.

Leonardo da Vinci's continuous refinement of his five senses enhanced his ability to work and think.

Connessione: Seeing the Interconnectedness in Everything

Leonardo da Vinci's appreciation for the interconnectedness of all things enabled him to see and use the larger picture to his advantage.

Curiosita: Being Curious About Everything!

Leonardo da Vinci cultivated an insatiably curious approach to life, reflected in his art and inventions.

If you would like to get more acquainted with Leonardo da Vinci's life and work, these online destinations offer interactive presentations and learning, rich visual galleries of his work, sketches, journals, and inventions.

An interactive journey through da Vinci's life (1452-1519) and works to discover what made him a true Renaissance man. Includes a picture gallery of famous masterpieces (including the Mona Lisa), timeline, and free computer desktop wallpaper to download.

An information-rich resource from the Boston Museum of Science featuring four categories of da Vinci exploration: Leonardo at the Museum, Exploring Leonardo, Renaissance Man, and a Multimedia Zone.

Leonardo and The Horse

A project fulfilling Leonardo's great horse sculpture proposal — 500 years later. "The goals of this project are to honor the genius of Leonardo and pay homage to him by building a colossal horse based on his drawings."

An encapsulated summary of da Vinci's personal and professional life accomplishments including his paintings, inventions, and notebooks.