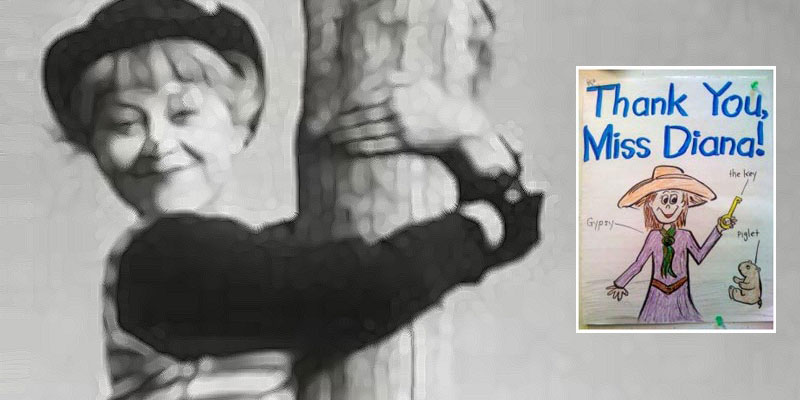 Giulietta Masina, Gypsy and a Classroom of Children

How many film artists, actors and designers all draw inspiration from Federico Fellini's magnificently constructed worlds, connecting thoughtful story structure and characterization? Countless. It's curious to think about when one artist inspires another's work, it's a co-creation of a separate entity. Like any great piece of art, it takes on a life with legs to walk, hands to mold and eyes to direct the way.

Fellini's wife and collaborator, Giulietta Masina, did that to me. The first time I saw her in Fellini's "La Strada" she performed the role of Gelsomina, a fey young woman sold off to a strongman by her mother. There is a whimsical quality to her that captured my kaleidoscopic imagination. Here is a rolling image bank showing her with the strongman, becoming a performer for the circus act, and an emotional progression which leads to a very sad story end.

So, how does Giuletta Masina connect to a swanky cabaret in San Francisco and ultimately a character I developed named Gypsy that I recently taught to children?

In San Francisco, I produced, along with an amazing ensemble of creators, a fellinesque hybrid cabaret called "Rococo Risque." We incorporated original material driven by eclectic character's dealing with human conflicts, a bizarre life experience or some kind of human need. Inspired by Masina's portrait of Gelsomina, I drew from the authentic quest for the unknown and thirst for unleashed talent to create Gypsy.

Gypsy, also known as the little girl, embodies curiosity or as much as she could being performed in a smoky-yet-hip whisky bar in San Francisco. The character discovers, through a unique journey with her cohort, Piglet, her greatest talent: she can turn into anything. Gypsy was a hit for many of the adult audience members and I had a hunch that even though the run of our show came to a close, Gypsy still had a longer life line.

It was true. Years later during a residency in Los Angeles at the Music Center, I had an opportunity to build curriculum for a 1st grade class in any specialized aspect of the art of performance. It dawned on me: take the story of Gypsy and revamp it so that it would be 1st grade friendly. This would be a rare opportunity to make her not just a child-like character performed by an adult actor, but have her be interpreted through the eyes of children and be performed by them.

To make it suitable, I had to slash some aspects of the original story and add other details. In brief, the result was a symbolic transcendence of how Gypsy found a key which led her through a theatre, which led her to know her greatest talent to transform into anything. I brought the story and a carefully constructed curriculum to a classroom of first graders. It was a huge hit as they stepped into the role of Gypsy and used other techniques of performance, including mime, to tell the story within a 6-week process.

Watching my students complete their final performance, I realized something. Gypsy symbolized the art of performance, which is to me, the art of transformation. This was why I appreciated Giulietta Masina in the long run: as an actor she could turn into anything. Her petite frame seemed to illuminate the dramatic gestures of her face where every emotion multiplied. Her style of performance was a house of mirrors reflecting the elegance of a knight or the buffoonery of a court jester. The character Gypsy had that same quality about her too, except she was a child herself and could speak to the imagination of other children.

As you can see, the connections of inspiration create a circle and then a spiral. Somewhere in between is me, the artist, co-creating with Giulietta, with Gypsy and with children.

Where does inspiration go to next? Once a story has been created, it has a mind, heart and spirit of it own and directs the artist along the path it believes it should go. In that process, you hold the key to your imagination and the doors of creative perception to continue up-leveling the process one step at a time.

This is a potential, yet it's more than just goodwill that transforms inspiration into art. At any moment that you deny the hunch, limit yourself from the possibility of where your art can go or fail to connect how the original inspiration has called on you to make that art, it disrupts the natural process of creation. Creation is having the key and with certainty and confidence unlocking the door to its destiny.