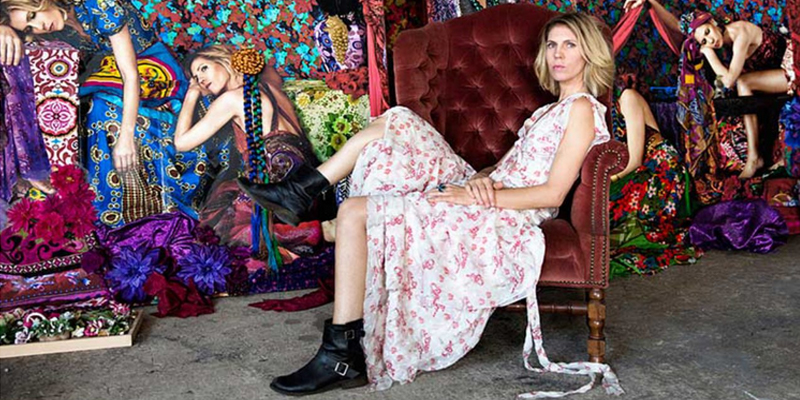 Creative Miami: Nina Surel's Studio, a Touch of the Feminine

An exchange of experience, shaped into conversation, distilled onto canvas.

On a recent trip to Miami, I came with a question: What is Creativity Today: Miami? Inside of me I was curious about the people and places that make up a synergistic artist community in the southern most cosmopolitan city of the United States, crowned and arranged in la hispanidad. Beyond Art Basel Miami, and the hoopla that international, art festivals bring to any community, what happens when the lights dim and the curtain closes? Who is still performing the fine art of their own personal performance in creativity?

I went on a hunt through the city like a fox with a compass, a clown with a note pad, a detective with a wand.

I arrived at to the Art Center SF of Miami to learn more about their artist community and organization, and was given a tour by their Executive Director, Chris Ingalls. As we walked through the corridors of the 40 + artist resident studios, we were invited into Nina Surel's Studio by her welcoming smile and a canvas of a Klimt-esque, succulent collage painting of a majestic woman.

I had an opportunity to meet with Nina a couple of days later. The same smile welcomed me into her studio and I was drawn to how it was adorned with glass jars of costume jewelry, antique buttons, porcelain flowers and lace strings falling from shelves. Looking at the details of the room, I felt the rarity of my fingers turning into rose petaled syrup.

I came to learn about how Nina creates. When she was a young girl in small town Argentina, she became ill with a form of rheumatism. As someone who studies the psychology of creativity, I was flashing back to many research studies that had been done on well-known visual artists who tapped into their artistry as a result of illness. The symptoms left her unable to be physically rigorous. It did allow her imagination to tune her fingers into another frequency: one where she could orchestrate with clay and other materials such as fabrics, paints and sewing.

Nina described her training and mentorship with a Spanish ceramist in her town. She spoke of leaving her 'day-job' to claim her artistry. She offered a timeline of her experience coming to Miami as a personal revival. In the background of her explanation was the silhouette of her paintings, many of which featured a digital image of her as the principal subject adorned with flowers and arranged in jewels.

From her interpretation, I learned that her new series of paintings included her as the primary subject. Each series expressed her own personal transformation as a woman and as an artist. It was a collection of conscious and unconscious stories that propelled the play of her femininity on canvas.

It's interesting to wonder about why one is drawn to a piece of art. Perhaps it is this conversation between her story of the feminine that had catapulted my attention consciously and unconsciously to be curious and seek out a conversation. As she poured me jasmine pearl tea, my fingers wrapped around the dainty floral painted porcelain cup. I sat back with the peace in knowing that any artist's work is a result of an intrapersonal conversation and it is in moments of inquiry and authentic listening, that I heard an artist's personal journey as if it were my own.

What is creative Miami? Within that hour, creative Miami was an authentic exchange of experience, shaped into a conversation, distilled onto canvas. It was the antiquated pieces of jewelry, paints and fabrics that defined the collage as a story where I became a character within it: a crowning flower with wings of an ear.

Have you met an artist recently that has sparked your curiosity? What would you care to know about in that person? How does that question relate to you?