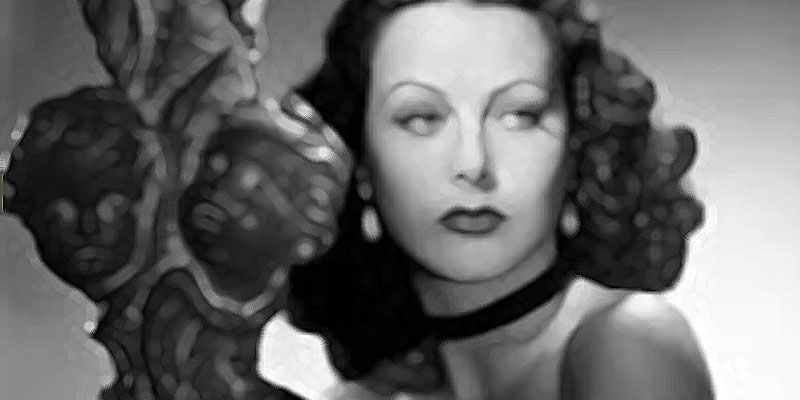 How are beautiful actress' of Hedy's era understood?

“I have not been that wise. Health I took for granted. Love I have demanded, perhaps too much and too often. As for money, I have only realized it's true worth when I didn't have it.” — Hedy Lamar

Hedy Lamarr (1913-2000) is a Hollywood starlet in a luminescent observatory. She has been waiting for the exact moment to enter spotlight most likely to be reckoned with by you, by me, by the millions of others that'll discover and muse over her. She planned it this way. Hedy was stunning, and her beauty was glorified at the exact aesthetic time to capture that quintessential black and white starlet look incorporating jewels, deep red lipsticks, silks and fur.

Hedy was an Austrian native, married six times, divorced, rose to fame. Somehow it reads like another starlet's life, yet it would be simplistic to clump her along with everyone else because she is not like anyone else. Although Hedy is famous for her beauty, her style and her films, to me she is famous as a creative, collaborative inventor.

What you may know is that growing up in Vienna, she was introduced to the piano by her mother and mentor, Max Reinhardt. Her background in music and the future learnings from her first husband, a munitions manufacturer who did research on control systems, led to a major discovery. After her divorce to him, once she had come to Hollywood, the U.S. went to war with Germany in World War II. She was determined to help the effort and she began to collaborate with her musician friend, George Antheil.

Hedy was constellar in her thought process. Together with George, they united her second-hand learnings of music, the german weapon systems, and his expertise with player pianos to devise a new invention. They created a frequency hopping system, which would protect U.S. radio-guided torpedoes in the Second World War from being intercepted by the Nazis.

"However, the US Naval Department would not take an idea proposed by a beautiful actress and a musician seriously, even when that idea had the support of the newly established National Inventors Council. Hedy was encouraged to support the war effort by selling kisses to promote the sale of war bonds, and she did so very successfully." (Crammond, p. 523).

Although Hedy and George patented their idea, it wasn't used in U.S. ships until 20 years later after the expiration of the patent.

How are beautiful actress' of Hedy's era understood? In the broadest way, they are adored for beauty, not innovation. In the most creative way, they could be seen as prismatic as the diamonds they wore, not just a pearl on a pillow.

Conscious or not, legacy-driven or not, Hedy planned a beautiful room of innovation to greet her in. Close enough to the spotlight where she was personally driven to, the observatory hosts a constellar vision of what passion (in her case political), learnings from previous relationships and artistic experiences can be when in concert with another.

What is a gift you have that might appear to be a secret to others? How might that gift be part of a larger, constellar vision of the world?

Next: Parisian Back Streets to the Imagination and Yann Tiersen