Many therapists use writing to augment talk therapy.

from Writing for Bliss by Diana Raab, PhD | Updated February 9, 2019

Today, many therapists use writing to augment talk therapy. In fact, sometimes writing is a vital part of many psychological interventions. Usually, writing is a solitary activity that can be done before or after a therapy session. Sometimes practitioners ask their clients to share their writings as a springboard for beginning the discussion.

Writing is also one way you can communicate with yourself. It provides a container for your feelings and emotions. Sometimes such writing might feel good in the beginning, but if you write about painful subjects, the process can become too painful. This would probably a good time to take a break and do something else. Chances are that you will have already achieved the therapeutic results of writing for healing.

One of the most amazing and magical aspects of writing for healing is that, once you make the decision to put your pen to the page, you have no idea what will emerge. For example, a friend of mine had gone into counseling as a result of childhood abuse, and the therapist gave her some writing prompts to get her creative juices flowing. The narrative writing helped her revisit her childhood trauma, which had resulted in post-traumatic stress disorder (PTSD). The writing process helped to dissipate some of her overwhelming emotions about the trauma by providing a safe container for them. Her therapist also suggested writing a dialogue between herself and her perpetrator, and the writing that emerged revealed essential information that resulted in transforming her outlook on her life.

Surely, you have met people who express themselves with more ease verbally and others who find writing easier. Those who opt out of writing may not be big readers, or they may have had a bad experience in school where they were told they were poor writers. When doing therapeutic writing, it is important to remember that grammar and syntax do not matter. Writing about feelings is simply a way to document or chronicle life issues or experiences. In a sense, you are having a dialogue with yourself. Writing down your feelings can be liberating because you are not sitting face to face with someone, sharing deep and intimate secrets and living with the fear of being judged. Indeed, you don't have to share your writing with anyone at all, if you don't want to.

In my writing workshops, when I help participants tap into their subconscious minds they are often amazed and fascinated at what emerges. They may begin writing about one subject and then take off on a tangent and write about something completely different, which often leads to a deeper sense of self-discovery. In the end, they find themselves writing about what it seems they were meant to write about, rather than what they thought they should write about. In doing so, they learn that they have a container for their true feelings, which can be very empowering.

Your writing response to this prompt can provide useful information and be a good guideline for you when you are trying to make a decision about something.

One thing I have noticed — and a word of caution I'd like to share — is that too much of therapeutic writing can sometimes lead to what is frequently been called "navel-gazing" or ruminating. When that happens, you can become stuck in the drama of your past without examining ways of healing and moving forward through the pain and trauma. The best way to avoid navel-gazing is to merge or weave your story with a universal truth or sentiment. For example, if you are depressed about your youngest child leaving for college, think about the havoc happening in war-torn countries and how many children there will never have the chance to step foot into college. This puts your life in a larger context.

Ever since my childhood when my mother gave me my first Khalil Gibran journal to help me cope with the loss of my grandmother, I have often used writing as a way of healing. Serving as my best friend and confident, my journal held all my deepest and most heartfelt secrets and contained all the sentiments and feelings that were most important to me. What I loved most about journaling is that I had a friend — a friend who was not judgmental or opinionated, a friend who listened. Sometimes all we want is someone to listen to us. My journal was wonderful because it did not talk back to me. Writing was my way of being heard, given that my parents held the old-fashioned tenet that children should be "seen and not heard."

My colleagues and I would not be the first writers who have reported that we write to dissipate pain. Fiction writer D. H. Lawrence use to sit at his mother's bedside while she was dying and write poems about her. He also began an early draft of Sons and Lovers, his novel that explored their complicated, loving, painful, and close relationship. Marcel Proust wrote Remembrance of Things Past while sick in bed with asthma. Flannery O'Connor wrote some of her best stories during her bout with lupus, from which she ultimately died.

Writers May Sarton and Anais Nin wrote in their diaries to pull them through their difficult times. Nin's writings deeply resonated with me, and she played an important role in inspiring my own writing. Also, we both began journaling at the age of eleven — I in response to my grandmother's suicide, Nin as a letter to her father after he had left the family for a younger woman. We both began writing as a result of losses in our lives. As I did, Nin transformed her traumatic experiences into art. Her journal entries amounted to more than thirty-five thousand pages, which eventually were excerpted and put into seven published books. In her own book, Recovering (1980) May Sarton chronicles her battles with depression and cancer.

Journaling is a cathartic and safe way to spill out your feelings. It is important to note that, in journaling, you are not necessarily chronicling the events of your day; rather, you are documenting and getting in touch with your feelings and thoughts as you write. My attitude is to "direct your rage to the page." I have a writing colleague who says, "If it hurts, write harder," and for years those words were posted above my computer until they simply became a part of my literary life.

In his book, Writing to Heal (2004), James Pennebaker says that the art of writing has the ability to break down some of the barriers between you and others, and that sometimes writing to other people is an easier way to communicate rather than looking at them in the eyes. Pennebaker believes that a certain type of writing erupts when we are faced with loss, death, abuse, depression, and trauma. He does have one rule, however, that he calls "the flip-out rule," which proclaims that if you get too upset when writing, then it's probably best to stop and take a break.

Basically, therapeutic writing can help you understand yourself better and deal with various obstacles in your life that could include depression, anxiety, addiction, loss of loved ones, diseases, and life transitions. As writer Graham Greene deftly said, "Writing is a form of therapy; sometimes I wonder how all those who do not write, compose, or paint can manage to escape the madness, melancholia, the panic fear which is inherent in a human condition" (1980, p. 10).

Diana Raab, PhD is an award-winning memoirist, poet, blogger, and speaker who advocates the healing and transformative powers of writing. She's the author of nine books and over 500 articles and poems, including her latest book, Writing for Bliss: Telling Your Story and Transforming Your Life (September 2017). 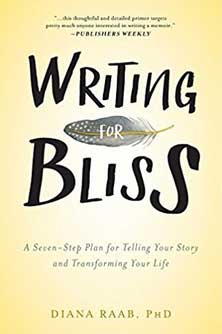 This feature is an excerpt from Writing for Bliss: A Seven-Step Plan for Telling Your Story and Transforming Your Life. Copyright ©2017 by Diana Raab. Published with permission from Loving Healing Press.