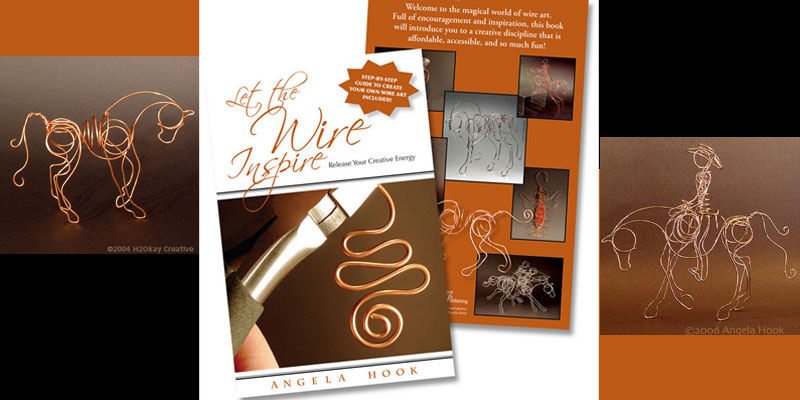 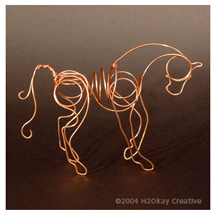 Years of art appreciation and education led me to realize that art can be thought of as a language, spoken only by those Earthlings known as "artists." The remainder of the population requires interpreters in order to understand their messages. Hence, reading about art can be thought of as learning another language. Of course, this is always easier to do if you immerse yourself in the culture. If you want to learn to speak "art", then be an artist.

If you are skeptical, and you are thinking that you could not possibly be an artist because you don't have a creative bone in your body, then you need to remember this: creativity does not come from your bones; it comes from your heart!

By bending your first piece of wire in an unintentional manner, you have uttered your first words. You have articulated a thought in an unknown language. Interestingly, those who already speak "art" will try to decipher your message with great intent.

This phenomenon is similar to that of a baby discovering his voice. The coos and gurgles seem unintentional until the day that one of those sounds resembles a word from the English language. Suddenly, the child is perceived as a genius and has boosted his father's ego tremendously by unknowingly saying "da-da".

Another artist may observe your early works and interpret your message as angst or frustration when, actually, you were just getting comfortable with your new voice.

Wire itself has some adjusting to do to its new position in the fine art world. Having been used for utilitarian purposes for ages (consider ancient Egyptian jewelry, chain mail, shopping carts or cooking utensils), wire has recently had to redefine itself as a viable artistic medium. The idea of using wire to create a sculpture may take artists some getting used to.

The concept of three-dimensional art has been around forever, particularly that of the subtractive kind. When defining sculpture, most people will describe Michelangelo chipping away at a solid mass to reveal the spirit buried within it. This form of sculpture is considered subtractive, because the artist starts with a defined volume and removes what is not needed to arrive at the finished piece.

Additive, or linear sculpture, however, is a relatively recent form of expression. First investigated near the beginning of the 20th Century, the additive construction of three-dimensional art was popularized by artist groups such as the Cubists, Constructivists, and Dadaists. The introduction and availability of new materials around this time in history opened up a whole new world of possibilities for these artists. No longer were they restricted by the eventual size of their work or the limiting properties of their traditional materials. They could keep adding to their sculpture until they ultimately decided that it was done.

The additive process is far more dynamic than the traditional subtractive methods, since there is no pre-determined outcome. A strand of wire is the perfect choice for this type of construction, since it is very flexible and forgiving in its positioning in space. If you find it necessary to adjust an angle or curve after having considered its relationship to the rest of your sculpture, you can. Nothing is set in stone — literally!

When you begin an additive sculpture, you may not have a plan for what you are about to make. You also may not know when to stop. This can be a frightening thing for people who are used to controlling outcomes in their lives. You may have to ramble on nervously in this foreign lingo, as if telling a joke, until the punch line comes to you. Then you will deliver it and step away. Your wire is now art. You are now the artist.

Next: A New Look at Photography

Letting the Wire Inspire and Releasing My Creative Energy

Who knew bending and twisting strands of wire into works of art could be so much fun?

Wire artists, that's who. Artists like Alexander Calder (1898-1976), who is credited with developing this new method of sculpting in the 20th century and changing the course of modern art with his three-dimensional wire figures and harmoniously- balanced mobiles.

And others like Elizabeth Berrien, acclaimed as the "Godmother" of the modern wire sculpture movement who has made a living from her wire animals since 1980. Her repeated caution for new wire-ists is this takeaway: Don't put your eye out!

Add another creative wire artist to this list: Angela Hook.

When I first came upon Angela Hook's Wire Inspire site I immediately knew that whatever she had to say about "expressing oneself creatively" through wire was worth its weight in gold. One click into the site's gallery not only revealed a stable full of beautifully-sculptured single-strand wire horses sitting, standing, galloping, and jumping, but expressed what wire artists have long relished about this unconventional artistic medium: it's creative, addictive, and fun.

What is it about wire art that resonates with so much familiarity? Quite simply, wire represents one of the most basic visual elements of art: the line. And with an exclusive focus on the line, an artist can interpret it into 3D space to produce infinite possibilities of artistic expression. It's simplistic, yet full of unbending potential.

Angela began exploring this artistic medium in 2002, and now teaches workshops and books speaking engagements on wire art. And if you'd like to bend beyond the surface and get some hands-on experience with this medium, I highly recommend reading Angela's book, Let the WireInspire: Release Your Creative Energy. No doubt, you'll get one of the most friendliest, assuring, and encouraging introductions to wire art in the world! I know because I read the book cover-to-cover in one afternoon and promptly made a courageous attempt at bending my very first wire sculpture: a fish in a bowl. 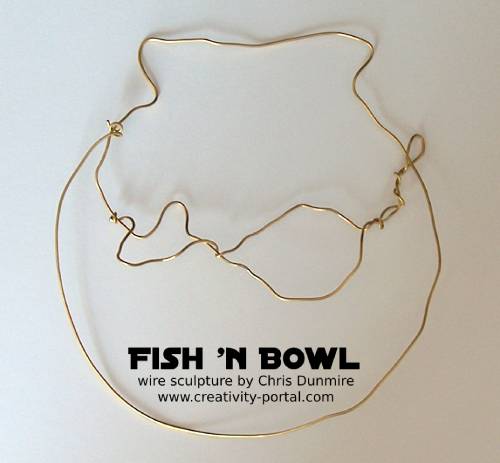 Look what you already know before you make it past page one. Angela instructs:

"I strongly encourage you to have some wire nearby as you read. Any wire will do. Wire that was meant to hang a picture, secure a garbage bag, or even build a fence will serve your purpose to start. It will help to get you thinking about space. It will allow you to relate to the descriptions in the book. Feel free to handle your wire as you go. Twisting, holding, bending, and kinking. Essentially, you will be 'doodling in space'. Without a pattern or directions, your mind will wander and explore the texture, resistance, smoothness, and strength of the wire without panicking about what it was meant to be in the end. This will allow you to begin your relationship with this amazing new medium."

Along with this assurance you'll have the privilege of accompanying Angela through six chapters: "Searching for a Creative Outlet", "The Language of Wire", "Exploring the Third Dimension", "Wire as Art Therapy", "A Project: Energy Angel", and "Sharing Your Experience."

And as the purpose of Let the Wire Inspire is to introduce you to this flexible artistic medium and guide you towards being creative with your own artistic ideas, Angela also provides a step-by-step "Energy Angel" project complete with dozens of detailed photos showing you how to bend, twist, and secure your wire into a finished hanging sculpture. The techniques you learn in this easy-to-follow tutorial can later be transferred into your own angelic works of art!

Angela Hook is a Canadian wire artist and author of Let the Wire Inspire: Release Your Creative Energy. Her love of horses is elegantly expressed in the fluid linear sculptures she creates using a single continuous strand of wire. ...

A New Look at Photography