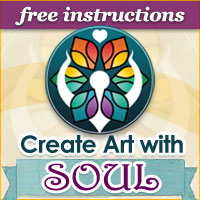 Collaging with Cancer: A SoulCollage® Journey

When I was first diagnosed with breast cancer in 2001, I was terrified, angry, surprised, worried, and basically jolted out of my daily rut. I felt betrayed by my body. Oh, and did I mention — I was terrified?

My treatment plan was straightforward: lumpectomy, node dissection, chemo, radiation. It was Stage II, we had caught it early, and all my doctors were giving me a very good prognosis. During the nine months of recovery from surgeries and treatments, I made some collaged note cards to give to my doctors, nurses, and healing team, but that was the extent of my creative endeavors during that time (although I did do a heck of a lot of journaling, as much as I could do with waning energy). Making those collage note cards, I felt delighted to be creating little bits of beauty to add to my cancer-quiet world.

Fast forward to 2011. July. Ten years later. Another diagnosis of cancer, only this time it was secondary angiosarcoma of the breast, caused by the radiation treatments I experienced in 2002. There was a tumor growing in my breast AGAIN, and this time I needed a mastectomy, followed by lots more (oh joy!) chemotherapy. This time around, the cancer was more aggressive, faster growing, and once again, I was terrified.

It was very possible that this kind of cancer could kill me, especially if it had already spread. No one could offer me any kind of a prognosis because secondary angiosarcoma of the breast is so rare. My surgeon, who has performed about 300 surgeries per year for the last 15 years, has only seen three cases like mine.

What’s a woman to do?

Well, somewhere between my first cancer diagnosis (2001) and my second (2011), I had found an amazing intuitive process called SoulCollage®, created by Seena Frost, an artist, poet and psychotherapist living in California. I had already created over 100 collaged cards (5” x 8”) which gave image to my life’s journey. I had made some cards to help me process the leftover feelings of fear and anxiety that remained with me years after I was “well” from the breast cancer. My journey led me to becoming a SoulCollage® Facilitator and I was offering workshops and retreats for women that focused on becoming our most authentic, whole selves, using this most amazing process.

By 2011, SoulCollage® had changed my life in many ways, and I knew firsthand of its power to offer healing and support to those in distress, transition, and heartache. When this new cancer diagnosis came, I was once again filled with a dizzying array of emotions, from anger and betrayal (my body has done this to me again), to sadness, deep grief, longing, fear and even guilt, like somehow this was all my fault. But instead of wallowing in these feelings, I turned to SoulCollage® instead. I pulled out my stack of images, bought some new magazines, gathered the scissors, mat boards and glue… and I began making intuitive cards that expressed the fearful tumult going on inside of me. I began making meaning from a very difficult journey. 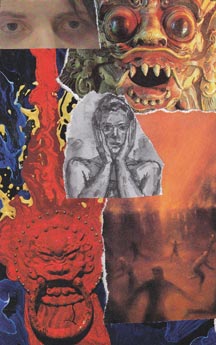 This is the first SoulCollage® card that I made for my second journey with cancer. I call it “Not Again!” and it helped me to articulate (in images and then in words) my frustration and sense of betrayal at the cruel twist in the road my journey was taking me on.

One of the things that sets SoulCollage® apart from other such processes is the journaling work we do with the cards after we make them. We actually enter the image(s) on the card and speak from them, instead of about them. This particular card was very vocal. Here is what it said to me:

I am the one who feels betrayed by my body and my medical team from 2002. I am the one who is PISSED off that my treatment for breast cancer caused me to get cancer again.

I am the one who shouts WHY ME to an unhearing universe.

Standing Up to Cancer

Being Held by Community

Resting in the Healing Light

Goddess of Peace and Mindfulness

Cancer and the Wounded Body 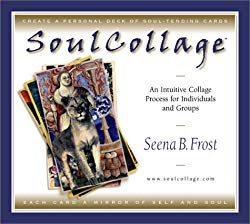 Learn more about the origins and techniques of SoulCollage® in the book Soulcollage: An Intuitive Collage Process for Individuals and Groups by Seena B. Frost