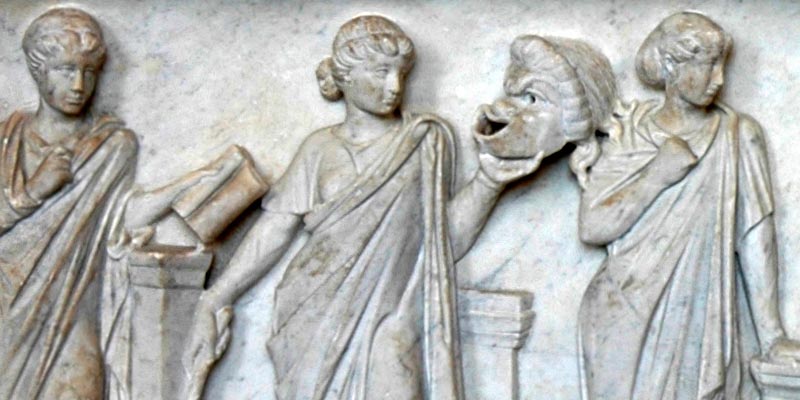 Tea-time with Thalia the Flourishing

Thalia, Athenian Muse of Comedy, tries to entice me to join her at a comedy club in New York City. Remembering Terpsichore's wild ride, I decline, letting her know I'm on a tight deadline. She kvetches a bit, then finally agrees to meet me in my favorite coffee-shop in Durango.

When I arrive, she's already there. I recognize her right away. She's about my age, tall and thin. She has long, wavy brown hair and is dressed in bell-bottomed jeans and a flowered cowboy shirt. She somehow manages to look sexy, mysterious and alluring, despite the fact that she's wearing a red clown nose. She has ordered mugs of hot tea for both of us, and is sipping through the steam. "Thank you," I say. I don't touch it, being by now a little wary of drinking or eating anything a Muse offers. I'm on a deadline, and I suspect that if I sipped that tea, I'd wind up in New York City with her.

"Jane Austen once said, 'Wisdom is better than wit,' I believe," she begins. "Ha! What does she know? She was a dried-up old Victorian broad who couldn't even giggle because her corset was too tight. And speaking of too tight, what she really needed was a good—"

"I'm not here to talk about Jane Austen," I interrupt, scandalized. She's talking loudly, in a brassy Brooklyn accent, an irresistible voice that makes all the other customers turn their heads.

She giggles, then makes eyes at a cute college boy drinking chai at the counter. "Wisdom and wit are of equal measure; they each have a place in the world. Wisdom is wonderful at certain times. But wisdom is cold and logical — it will not cheer you on a dark day — and knowing too much about the world can be awfully depressing! Wit — comedy, and it's natural accompaniment, laughter — can save your life."

She pauses for a sip of tea. "They call me Thalia the Flourishing. Want to know why? Comedy and laughter make new things grow. They allow you to re-frame an old situation or problem in new ways. It injects stale ideas with fresh, creative fire — and they stop you from taking yourself too seriously — which is death for any artist." She sips her tea. "Laughter is scientifically proven to cure diseases and prolong your life span — look at George Burns, he was ancient, even by immortal standards, when he passed on. He's even funnier now, you know. Wisdom can't do that for you." Another sip. "You've heard the term, "Laughter is the best medicine, right?"

"Well, it's true. Stress causes 75% of ALL illnesses. Laughter is the best way to relieve it. Crying ruins your eye makeup, and sex is too complicated. But you know that already. I've seen you make some very good jokes when you're under stress. It puts everyone at ease — especially you."

I smile and nod. This is true of me; in fact, it might be considered a family tradition. I learned to laugh at the most inappropriate times from my mother. She could find something funny about a funeral — and she had a beautiful laugh. "So, what's the best part of your job?" I ask.

"I wouldn't call it a job. I was created to do this, and I'm qualified for nothing else. It is my passion, NOT my job," she says fiercely. "But since you ask — There's something delicious about laughing when you should be solemn and serious," she tells me. "Church services, funerals, graduations — I delight in the ability to tempt mortals to stop taking serious things so seriously. I invented the whoopee cushion myself, about a hundred years ago — and I'm proud to say it's a timeless classic, which is still popular in churches and classrooms all over the world.

"When a stand-up comedian goes out on a limb to say something so wild, so shocking, that everyone in the room gasps — something everyone is thinking, but few have the courage to say — and then goes even further, and makes them scream with laughter, I'm right there backstage, egging him on."

She takes a sip of tea. "There's nothing better than a good joke, and nothing worse than a bad one. I consider bad jokes a crime against nature! That's why I also invented this — " She snaps her fingers, then opens her hand wide. With a loud "POP!!!" a long wooden shepherd's crook appears and she closes her fingers around it. "In the ancient days, before critics and bad reviews I used this to pull bad comedians offstage; the really horrid ones got smacked upside the head with it a few times — but alas, in this age of lawsuits and political correctness, that pleasure has been denied me. Otherwise, Gilbert Gottfried would be black and blue!" She grins savagely, and I'm a bit afraid of her.

"Don't worry," she said fondly. "I think you're very funny. You're safe." She laughs merrily, a naughty glint in her eye. "You haven't touched your tea. Would you prefer it iced?" With a snap of her fingers, my steaming mug of chamomile is transformed instantaneously into a tall, frosty glass of iced tea, with a wedge of lemon on the side. I lift the glass to take a sip, then notice a huge grasshopper staring at me from inside one of the ice cubes. Startled, I drop the glass, and it shatters on the floor. At the same moment, Thalia disappears in a large cloud of orange smoke, leaving only her wild laughter behind. Everyone is staring as I clean up the mess, pocketing the fake ice cube.

Later, at home, my husband asks, "How was the interview?"

"Perfect," I say with a mischievous grin.