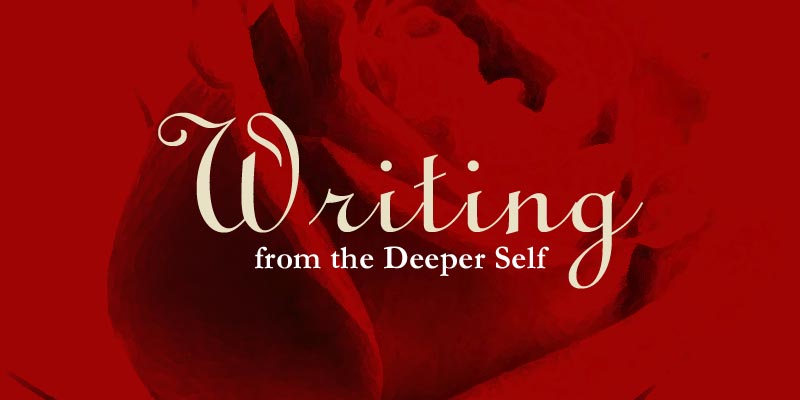 Writing from the Deeper Self

Writing What Can and Can't Be Said

Why we need to; why we're called to.

"Ah, but a man's reach must exceed his grasp/ Or what's a heaven for?" —Robert Browning

Not long ago, I was going through one of those times ~ transformational, one hopes, rather than just debilitating ~ when the very roots of my assumptions about myself were being shaken. To have been told, as I had by an exceedingly wise spiritual teacher, that transformation did pry loose one's self-identities, in the course of opening one to the larger Being within, was the only mooring I could cling to, as wave after wave of loss of self-image washed over me.

Something inside ~ that place that can witness, despite the turmoil being experienced and so deeply felt ~ took note of both the process of ego-dishevelment and the contents rising up: primal contents, never consciously known before or willingly brought forth in what I had hoped was the steady soup of myself.

Theories about some of my lifelong patterns, too stuck to the bottom to ordinarily be visible, jounced through my mind: I must have been a forceps-delivery baby, brought forth before I was quite ready (and accounting for my tendencies to feel pulled along too fast, even when I was the one doing the pushing, and to arrive places late). I must have been left in my crib, cold and hungry and wet, to cry, and no one came. There was, of course, no way to prove any of this, no alive parent to ask. But there had to be something to account for that hole at the bottom of things, despite my accomplishments and development in life and in the world.

To feel what has been called "pre-verbal" feelings, when you are beyond middle age and known to the world and yourself to be articulate, is to be humbled into the realization that one is no better than anyone else, and perhaps at base no different. It is not that there is no point in striving for some of what we are encouraged to strive for ~ even worldly success, I have read on good spiritual authority, develops highly useful inner qualities (endurance, persistence, and so on) that can be put to use on other levels as well.

It is that in allowing our exclusive focus to be on success in the world ~ whether as an entrepreneur (which I am), a creative person (which I am), the author of a book (which I am), or a self-improved version of the original self ~ apparently takes us away from the real focus of why we are here on earth, and who, in actuality, we are. The inner tsunami/earthquake/hurricane of an upsurge of preverbal self-lessness at least temporarily reveals as a fiction the persona of being on top of things all the time, having it all together, and being a separate being. We share in the universality of being, whether we experience it through the narrow door of personal suffering, or the illuminated door of belonging to everything. And sometimes, the narrow door leads to the illuminated one.

That was my experience, within a single day. While feeling like an emptiness wearing clothing, an insoluble question convinced of no response (because from that cold, wet, hungry, abandoned, dependent infant place, there had been none), I took myself to a spiritual celebration: the presence of the 22nd-generation granddaughter of the "best-selling poet of our time," the 13th-century mystic Jelal ad-Din Rumi. I came with my emptiness, and sat amidst women, men, and children. A beautiful, stately young girl had greeted me at the door, offered to anoint my wrist with rose perfume. Sitting in the large room; seeing and feeling the love there; watching the babies rest in their mothers' arms, wriggle happily to greet a neighbor; hearing the drone of the droning instrument and the melody played on top of that by the strings, I felt I could be there with my emptiness and there would be room for me, and for it inside me.

We sat. I listened, as a loving welcome was spoken in a voice resonant and bass. I came to remember that there was nothing I had to make myself do; that when I could be here with my heart, whatever lovely or strange gifts it brought up from its bottomless well, there was no way I could not belong. The painful separation was internal, and could also be repaired from within.

Breathing, I stood; I danced; I turned around, centered in my heart, turned like the planets in the sky. And I noticed how my heart began to return to me, how it became the center of my being and my point of viewing; how that was what I had been hungry for, and had mistakenly thought (as old, preverbal feelings rose up) that the remedy had to come from outside.

And at the end, we formed a long circle, and each one of us passed each one standing in and forming the circle. As we passed, we paused. We extended our hand, grasped the other's in it like a loving fist, and at the same moment kissed each other's hand. I had never come across this greeting before, and I was taken with it. You got to bring your settling-down heart into your eyes, to use that gaze to see and even bless the person across from you, and at the same moment to place your lips on the outer rim of their hand, linked to the outer rim of your hand, which they were bringing their lips to in the same moment. There was something so immediate, so beautiful, and so natural in this ~ so friendly ~ that I felt encouraged with each person I stood in front of, receiving their gaze and kiss and giving mine in the same moment. When I got to the end of the line, I became the next one in that line, so that those behind me now stopped at me and I went through the same ritual, just from the other side.

It had happened, while I had been traveling around the circle, before landing in the host position, that I found myself directly in front of Rumi's 22nd-generation granddaughter. "We're going to kiss!" I realized, emptied in a very different way from earlier before. She looked at me with a great, deep affection. "Do you know what this means?" she asked me, taking my hand and raising it to her lips. Her eyes were directly opposite mine, that way, about six inches from mine.

I shook my head no.

She twinkled. "It means, 'Our souls are the same.'"

In digesting this, and what it was like for me to feel my heart open inside at a depth I had been longing for and unable to reach, I become aware that there are at least two ways in which writing what cannot be said can take place. The first is when something from old that occurred before words were available to one's very young being arises ~ something primal, from perhaps the now-famed reptilian brain. A lizard doesn't self-reflect, it just slithers and eats and does what it does. So to bring words to an internal uprising of unexpected pre-egoic identity material is pretty much not possible while that material is being felt. Only afterwords can some effort to give it form, containment, meaning, help come in. "It was like being devoured by emptiness," I could later say of that uprooting experience. Or, "I must have been a forceps-delivery baby, pulled out before I was ready, not given room to use all the way the force of birth latent within me." And, with those words, gaining some foothold that allowed me to start climbing out of the dark hole it had felt I'd fallen into.

But there is another way in which writing what cannot be said can be done, and that way must be attempted, if one is to reach for the largeness of one's being. Often, while writing, I have had the experience of opening to some inner knowing, some inner world, that no matter what words I use, what metaphors I am able to come up with, there is the distinct awareness, "That's not fully it." It's like (and, a metaphor here to say what can't be said) touching the top of the sky and naming that experience, only to realize the sky has no top. Even so, your naming the top that seemed to be the top raises you and your readers that far.

Artists who despair of their writing ~ and there are many, and they often are really good artists ~ sometimes do so because they sense, internally, what they are trying to reach for; and they know that, no matter how beautiful their writing, they have not fully limned that place, have not justly placed their hand around it to bring, a triumph-jewel, to their readers. I have been there; so have my writer-parents, who were both really wonderful writers, and who easily and frequently despaired.

But what I want to tell you, having in a single day touched into both wordless realms ~ the "devouring emptiness" and the expanded allness ~ is that it's okay. It's okay to bring back a glimpse of what you've touched, rather than the whole comprehensive package. It's okay to point a finger at the moon, rather than being able to bring back the moon on a string. It's okay to seek an elusive goal, to bring your best attempt at words to describe what cannot be described in words, it's okay; it's what we can do for ourselves and each other, to remind us of who we are below and beyond the poses of self-improvement.

Whether disheveled or magnificent, we are on a journey to know ourselves as aspects of the one Being, and so everything we offer through our writing ~ humanly foibled or illuminated, or places in between ~ tells us something of who we are, tells our readers something of who they are, and erases the lines of separation that we ordinarily believe are real but in fact are only internally drawn lines, and at that, drawn in chalk, not stone.

"no one ever asked me did I have a purpose, no one ever
wondered was there anything I might need,
for there was nothing I could not love.

"It was when I left all we once were that
the agony began, the fear and questions came,
and I wept, I wept. And tears
I had never known before.

"So I returned to the river, I returned to
the mountains. I asked for their hand in marriage again,
I begged ~ I begged to wed every object
and creature,

"and when they accepted,
God was ever present in my arms.
And He did not say, 'Where have you been?'

"For then I knew my soul ~ every soul ~
has always held Him."
—Meister Eckhart

Next: Creativity Isn't Just About Having Good Ideas

Naomi Rose, Book Developer and Writing Coach, has successfully used her "Writing from the Deeper Self" approach to help people with an inner-directed focus write the books of their hearts. ...

Listening Your Book into Being

For Fun, Write a Book

Your Book Can Heal the World

You are the Treasure Embedded in Your Book

Writing as a Quest

The Intimate Fruits of a Writing Retreat

Is It Commerce, or Is It Art?

Writing a New Chapter in Your Life

When Books are Less Than Life

Writing in a Spiral

The Value of Completing a Book

Writing as Giving Back

The Important Role of Silence in Writing

A Challenge to Write Long(er)

Writing What Can't Be Said

In Praise of the Feminine

Silence and Slowing Down

Returning to What Persists

The You Who Writes

Slowing Down and Listening Inside