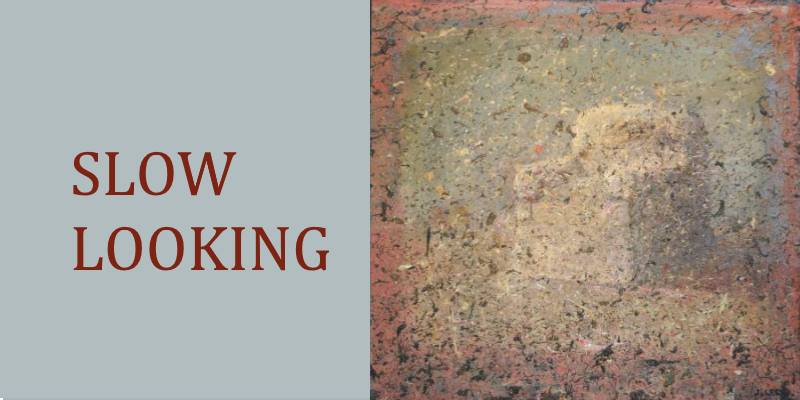 Silence is the aural complement to space: once you find it, it is limitless, it reaches everywhere.

"It is the heart always that sees, before the head can see." —Thomas Carlyle

One of the intriguing things about a painting is the paradox between its literal silence as a purely visual object and its implication of sound, its literal stasis and the sometimes agitated movement it suggests to the observing eye. It makes perfect sense to me to talk about a painting as being noisy or quiet, talkative or taciturn, busy or still. There are paintings that communicate to us in utter silence (think of Ellsworth Kelly's totally uninflected monochromes) and others that are as cantankerous as a pub at closing time or as cacophonous and dynamic as a busy city street. It's perfectly possible to enjoy a good, civilized, person-to-person conversation with a picture on a museum wall. Talk to it, listen carefully, and it will more than likely talk back to you.

But sometimes the silent treatment is rewarding. It's a pleasure to simply allow the mind to open up attentively and absorb the artist's work, without the interference of word or thought — and especially without judgment. To be honest, it's rare for me to open myself up to a painting in this way, to simply be with it in silence.

This morning, as I sketch out these preliminary thoughts, my often loudly protesting baby grandson Luka will coming over just a little later for his weekly Wednesday at Grandma and Grandpa's house, so it seems like a good moment to devote some thought to silence. In fact, I was thinking about it already last night. My wife Ellie and I were hosting a meeting of our artists' group, which we usually begin with a few minutes of guided meditation. It serves to get our friends off the freeway or the city streets, away from the day's worries and concerns about tomorrow, and into the space we offer for reflection and debate. Either Ellie or I will normally lead the meditation with a few words of guidance as we sit, but last night for some reason I was moved to start out in silence by myself, while the preliminary chatter was still in progress — just closing my eyes and getting in touch with the inner space. Ellie and I seemed to be on the same wavelength, because soon afterwards she started the meditation with just a quiet word or two and then herself tailed off into silence. Aside from George, the dog, deciding after a few minutes that now was just the moment for some pressing canine conversation with the neighbor dogs, we sat in silence, without introduction and without the usual words of guidance for perhaps five minutes. I think that our group enjoyed the opportunity for solo flight into empty space.

Silence is the aural complement to space: once you find it, it is limitless, it reaches everywhere. It is an emptiness for the ear to apprehend. The Buddhist concept of emptiness is easily confused with the Western idea of nothingness — essentially a negative concept, an absence. But insofar as I understand the Buddhist term, it is far from that: emptiness is not a vacuum, but a place of infinite potential. So it is with silence. It is, in my experience, an aural space to which the ever imminent possibility of sound lends immeasurable, invigorating energy and power. You can inhabit it as you can any other space; and living there, even if only for a few precious moments, will generate a rare sense of serenity.

Not everyone loves pure silence, and indeed it is all but impossible to experience in our world today. There is always the distant hum of traffic, the drone of an aircraft passing overhead, one of George's canine brethren barking in the neighborhood... Even when we seem not to hear it, there is the constant, almost ubiquitous white noise of electronics in action. And while these things can serve to give focus and definition to silence — a bird's song, for example penetrating a meditative moment—they can also prove distractions. When I first started to practice meditation, one of the strategies I used to stay focused was to keep my ears sharp for the least of sounds, tracking its arising, its fullness, and its passing away. It was a helpful way to keep the mind from straying, a reminder to get back to the task of paying attention. So when I do my "One Hour/One Painting" sessions, I warn participants in advance about the likely intrusion of ambient sound, and instruct them not to allow themselves either to get involved in resistance, or to waste precious time and energy in the struggle to ignore it; but rather simply to note that it is there and let it recede in due course, as it certainly will.

I did once have the opportunity to experience silence in its purest form. The context was an art installation in which participants were invited to spend an hour in an anechoic chamber. The "chamber" was in fact a closed tank, large enough to accommodate a single person in a semi-supine position, filled halfway with a supportive body-temperature liquid — not quite as harsh as water to the skin, and of slightly greater viscosity. I climbed in naked, as instructed, and the hinged door was closed behind me, leaving me immersed up to the neck, in utter darkness and uninterrupted silence for the requisite hour. I was interested to find out what the experience of near-total sense deprivation might feel like; no sound, no sight, no taste, no smell—only touch remained, the feel of the skin where it made contact with the liquid and, around the head, the humid air.

I could best describe the feeling, as I recall it, as artificial. Since this was a work of "art," perhaps that feeling was intended. But the silence in that chamber somehow did not have the feel or the rich texture of "real" silence, which is defined by the possibility of sound. What I experienced was an absence, a nothingness as I have defined it, rather than an emptiness. The claustrophobic space of the tank did not improve things. It brought to mind the inevitable association with the womb; and yet in the womb — I don't actually recall this, of course, but I presume — we hear the heartbeat and feel the movement of the body that supports our life. We are warm, protected. By contrast, "inhuman," or perhaps "unhuman" — if there were such a word — might be the term I'd use to describe the sensation of the anechoic chamber. I decided that I like my silence to be less pure, less scientific, more infected by the imperfection of the human experience.

That imperfect, pleasurable silence is one of the familiar joys of those who practice meditation, but the proximity of others creates a special challenge in a group where not all participants are practiced meditators. We can adjust our hearing to the discreet coughs, the sighs, the occasional shifting of nearby human bodies. But more fundamentally distracting is the self-consciousness that tends to affect us when we are with others. So it was last night in our group session, when I could not help but notice that my mind kept wanting anxiously to fill the void. I wanted to jump in and rescue everyone from the boredom and discomfort I projected on them, even though they were probably enjoying the silence quite happily. Nature, we hear, abhors a vacuum. So it is with human beings and silence. There is the urge to fill it. Impossible not to notice, if you're strolling at the beach or in the park these days, how many of us walk or jog along with sound piped directly into our ears. In company, most of us find it difficult to abide even the brief moment of silence that might occur naturally in the course of a dinner conversation. It embarrasses us, as though it were some kind of personal weakness or deficiency to have nothing to say; so we feel compelled to say something, no matter how pointless or inane, in order to protect ourselves from the abyss that threatens to open up between ourselves and those with whom we speak.

In my "One Hour/One Painting" sessions, I try to remain conscious of possible anxieties around silence — including my own — and am careful to open up the space for it to happen. I'm aware that there is risk involved. Knowing that silence presents a challenge for many of us and that it can easily prove the source of discomfort and hence distraction, I take time at the start to talk a bit about it, and to prepare participants for an experience I hope they will be able to embrace for the pleasure that it is.

"To see clearly is poetry, prophecy, and religion — all in one." —John Ruskin