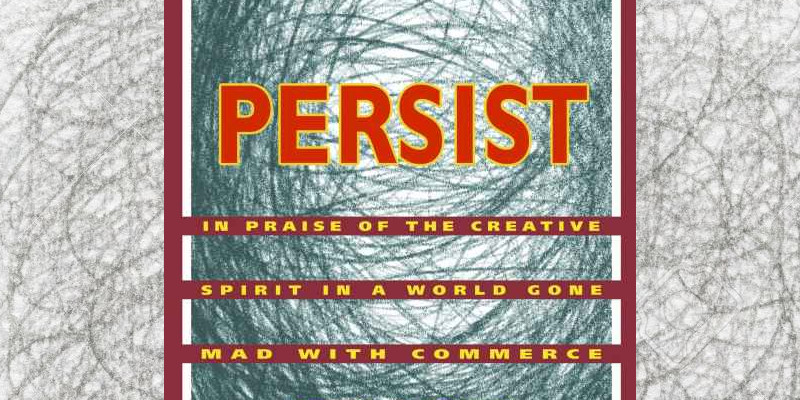 A Conversation with Peter Clothier, Author of 'Persist'

Creativity Portal contributor Peter Clothier is an inspiration to readers around the world. Clothier is the author of Persist: In Praise of the Creative Spirit in a World Gone Mad with Commerce and other books.

Q: Tell us more about Persist. What inspired this work, and what do you hope readers will gain from your insights?

A: Persist is a collection of essays written over a period of thirty years. The first was written at a time when I was Dean of Otis Art Institute, when faculty were teaching students about the need to be "professional." I understood what they meant, of course: that they should take themselves seriously as artists. At the same time, I knew that the vast majority of them would not be going out into the world and making a fine living as artists. They would need to find ways other than financial success and critical acclaim to keep their creative spirits alive. I wrote an essay called "A Word for the Amateur," in the hope of restoring the dignity of that much maligned concept. Since the publication of that article, in the 1970s, I have been observing the contemporary art scene as a writer and reviewer, and not much has changed. If anything, the art world has become more about fame and money than ever before. What I'd hope readers of Persist would gain is the inspiration to pursue their goals as artists (writers, dancers, actors…) despite the discouragements of a highly commercialized culture. We owe it to ourselves to "persist."

Q: Can we talk about your writing process a bit? I know it takes a lot of discipline to work as a writer. I'm wondering whether you keep to a set writing schedule, or if you simply write when inspiration strikes?

A: My book is very much about process and insists on the idea of practice. Inspiration very often does not strike. It's a matter of getting down to it and doing the work. I have found a very useful model in Buddhist meditation. You learn to show up, sit down, get focused, concentrate, and persist. Every time the mind wanders — and it wanders a lot! — you bring it back to your point of concentration. This is my writing practice. I show up, sit down, get focused on the writing, and persist. And yes, I do maintain a writing schedule. My best writing time is in the early morning hours, so my practice is to get up in good time, do my half hour of meditation, and get to work. I may only have two good writing hours a day, but that's enough. The rest of the working day is valuable for research, editing, posting, and so on. The business…

Q: I just read your post about Doldrums. How do you persist with your creative work when you're just not feeling inspired?

A: That can be a tough one. Generally, the sheer force of practice helps me get through such times. I don't sit around too long and agonize. There's a chapter in Persist called "What to Say When There's Nothing to Say," which describes a number of tricks I use to get back into the rhythm. When you think of it, there's really never "nothing to say." There's always something going on in the mind. All I need to do is take a good look inside and find out what that is. Sometimes it's just a matter of writing down the first few words, and following where they lead me. There's this wonderful adage: "How do I know what I think 'til I see what I say." Writing is a process, like all creative work. It does not simply result from inspiration, it actually generates it.

Take the time to sit quietly and watch what's going on inside. The mind is always at work. Meditation has taught me that it's possible — and always fascinating — to watch it. Once you catch a glimpse of what the mind is up to, you have a starting point.

Q: What spawned your monthly podcasts, "The Art of Outrage"? Have you had a good response from listeners? If readers aren't familiar with this podcast series, where can they find it?

A: I was invited to get going on the podcasts by Bill Lasarow, the editor and publisher of Artscene magazine, with whom I have collaborated for many years. When he approached me with the suggestion, I responded with the idea for "The Art of Outrage." I am myself outraged by much that is going on in the world and in this country today, and am much interested in artists who share that outrage and express it in interesting and challenging ways. I like that bumper sticker: If you're not outraged, you're not paying attention! And yes, the response was gratifying. Truthfully, though, I have moved on in recent months to newer ventures — like the publication and promotion of Persist, along with the guest appearances I have been doing to spread the word.

Q: What is your greatest source of inspiration?

A: The inner workings of the mind, and the always fascinating manifestations of the human spirit. It's all about our common humanity.

Q: What do you fear most, in regards to your work?

A: As a younger man, I used to be afraid of what other people might think about it, that it might be judged unkindly. That I might be seen as foolish, inadequate, a bad writer. That doesn't worry me at all any more. What do I fear now? It's not really a fear, but I worry about not being able to reach as many people as I would like to.

Q: What is the best way to attract and retain new blog subscribers?

A: Well, there you go. I think the best way is to be generous. To give out as much as you can; to reach out and follow others and respond to what they have to say; to be open to every possibility as it comes along. Persistence, I believe, brings its own rewards.

Q: The biggest creative mystery is…

A: Where does it all come from? To which, I guess, the answer is: the human spirit — also a mystery.

Q: Tell us, Peter — what's on the horizon for you? Where do you see yourself in ten years? What hopes and dreams do you have for your creative work in the next decade?

A: I hate to tell you this but in ten years, if all goes well, I'll be eighty-five! And, I trust, still writing! By way of compensation, let me say that the past year, my seventy-fifth, has been the most creatively rewarding of them all. The publication of Persist opened a new door for me: in speaking about the book to a wide variety of different audiences, I discovered the potential of a whole new medium in words — the art of live communication and performance. It has been immensely gratifying.

Having hidden behind my typewriter/computer for so many years, it has been a real joy to "come out." I hope to pursue this further in the coming decade. I also have two new books nearing completion. The first is something of a sequel to Persist. It's called, provisionally Nurturing the Creative Spirit. The second is tentatively titled This Is Not Me: Shedding Delusions. The title comes from that wonderful Buddhist mantra, "This is not me, this is not mine, this is not who I am," and it's about leaving behind me those parts of myself that I no longer need.

Q: Peter, would you share a few final words of advice and inspiration with us?

A: Keep at it. Put your heart into it. Give generously of yourself and find any means possible to put your work out in the world. As E.M.Forster wrote, "only connect." Find out what's most human about yourself and share that with others, even as you listen with a generous heart to those who also want to tell you who they are.