Wanting to See: A Concerted Effort to Write Haiku

In between my trips to Japan, I decide to make a concerted effort to write haiku. I hear about a Santa Fe haiku study group that meets at the local library the last Tuesday of every month. They don't count syllables. Just three short lines. Another group I hear about counts syllables and meets in an open field near my house, but with no regularity.

I think it's good to be aware of both: counting and not counting. If I didn't count a bit, rein in each line, I'd end up galloping into a short story. And if I only cared about syllables, I'd have a block of words with no soul.

Capturing the spirit of haiku is what I am most interested in. And haiku asks for a spirit that's not so human centered.

I drive to the library at the end of March. It's snowing out, the first and only snow we've had since autumn. But now it's spring and the apricot blossoms, always early, stunning in pale pink, will freeze. The roads are full of slow traffic. Santa Feans are fearful of both snow and rain, and even more of slush.

At the library, eleven people — eight women and three men — sit around three white tables pushed together. Some look familiar. One man, Charles Trumbull, I already know. He is very experienced in the haiku world, and he is giving us a lesson on Western elements of poetry — metaphor, simile, rhyme, personification, pathetic fallacy, and so on. I left these behind long ago in English classes.

All this is written on a handout. We turn the page over and Charles says: "Wabi-sabi is the Japanese aesthetics: asymmetrical, a sense of roughness, an intimacy, a closeness — it's different from Western concerns." Then he calls on a woman with a brown hat to read from the sheet: "Within the aesthetics is an awareness of the three marks of existence — what Buddhism teaches — impermanence, suffering, and egolessness, an absence of an individual nature."

I pay close attention. I'm pleased to hear the link between Zen and the essence of haiku. Then Charles also mentions simplicity, respect for natural integrity, and loneliness as a fundamental reality. He tells us the story of how Rikyu, the tea master, conducted a tea ceremony — "not a perfect cup, but one perhaps chipped, unbalanced, not round, so the imperfect truth can enter."

We were supposed to each bring in at least ten copies of one haiku to pass around. But first we go around the room and each of us reads aloud another one we have brought in. I have the one I wrote by the pond the previous summer:

On my brown socks
a single black butterfly
flaps its wings

This round is a way to warm up. There are to be no comments. We move swiftly from one person to the next and the next, like popping corn. But even that quickly I can tell that people are at different levels of haiku experience. I surmise that this is a very democratic group.

When I read my brown socks haiku, it falls like a dead horse on dead ears.

I've had this experience many times before, but mostly when I read prose aloud. It's a great way to measure your work, even without a comment from the listeners. You can feel if your words physically connect to others. This process denotes whether your work is present, cuts through others' discursive thinking, and meets their minds.

Now each person takes a turn passing out a single haiku. Cynthia, the woman next to me, economizes and passes out her haiku on the tiniest pieces of paper. The group comments about the paper size. Evidently, this is a running joke — indirectly it's also about the size of haiku.

Now we each have her haiku in front of us.

She reads it aloud twice:

A long pause and then the comments fly. Cynthia, the writer, nods and takes notes.

"How about changing the first smile to face," says the petite woman in a beige linen blouse. "You already have one smile. You don't need two."

"No, I like two smiles. It builds rhythm," says the man, who has been gone from the group for six months and just returned.

Then it is my turn. I pass out what now seems an enormous whole sheet of paper handprinted in big letters, with three haiku on it.

"Which one do you want us to look at?" asks Harriet.

I read it twice:

Diving into
this ice-cold pond
My seventieth summer

"Maybe glacier instead of ice-cold, to indicate high in the mountains?"

"Glacier has a slower sense, like being seventy — don't spell out the age. Keep it short," comments Sondra, the woman who sends out meeting announcements. She and Charles began the group five years ago. They met on Craigslist. Sondra put out a request for haiku writers, and Charles was the only one who initially responded.

"Maybe put 'my seventieth summer' first to give more punch, more distance between images," says a woman who drives up from Albuquerque each month.

I nod. I take notes, imitating the person before me.

I like this group. I also want to scream. But I decide to continue with the practice, to see where it leads.

I keep coming to the group. I never miss a meeting, month after month. And I keep writing haiku.

Eventually, what I begin to enjoy most is simply not knowing how to do it. I haul in my haiku each month, and they usually land like lead. I like not being good, not having a clue.

At the end of meetings, I'm sometimes pulled aside. Someone urges me, "Read a lot of them." Another suggests, "Write a lot of them." Exactly what I tell my own writing students about writing.

For more than thirty-five years, Natalie Goldberg has been challenging and encouraging writers through her books and workshops including Writing Down the Bones: Freeing the Writer Within. ...

'Writing Down the Bones' Interview

How to Flourish in Your Writing 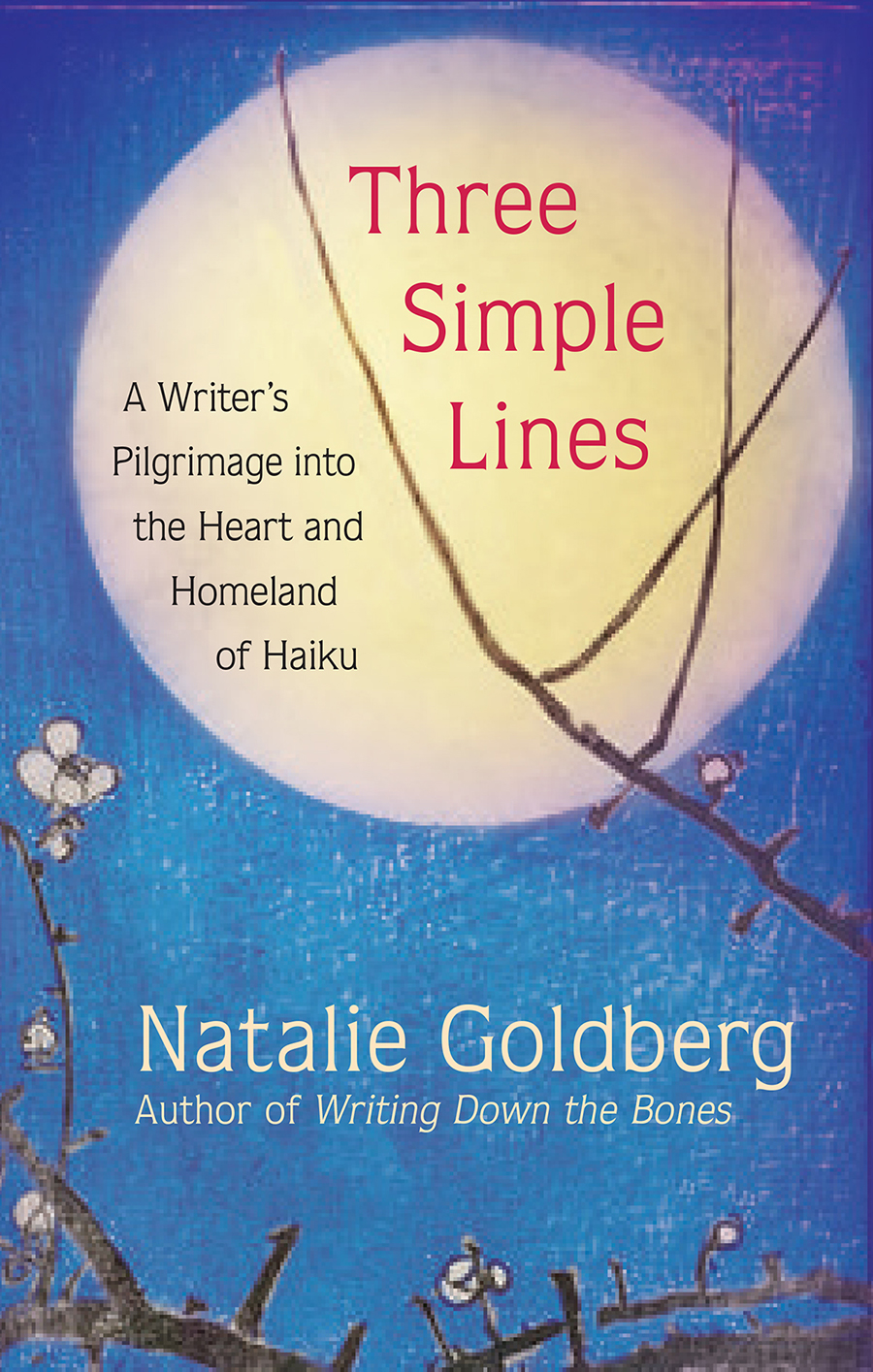 Three Simple Lines: A Writer's Pilgrimage into the Heart and Homeland of Haiku

Creative inspiration, food for thought, prompts, and ideas for dipping deeply into your imagination and turning words and images into poetic words of art.