An Artist vs. Critic Phenomenon

"Neither cast ye your pearls before swine, lest they trample them under their feet, and turn again and rend you" —Matthew 7:6 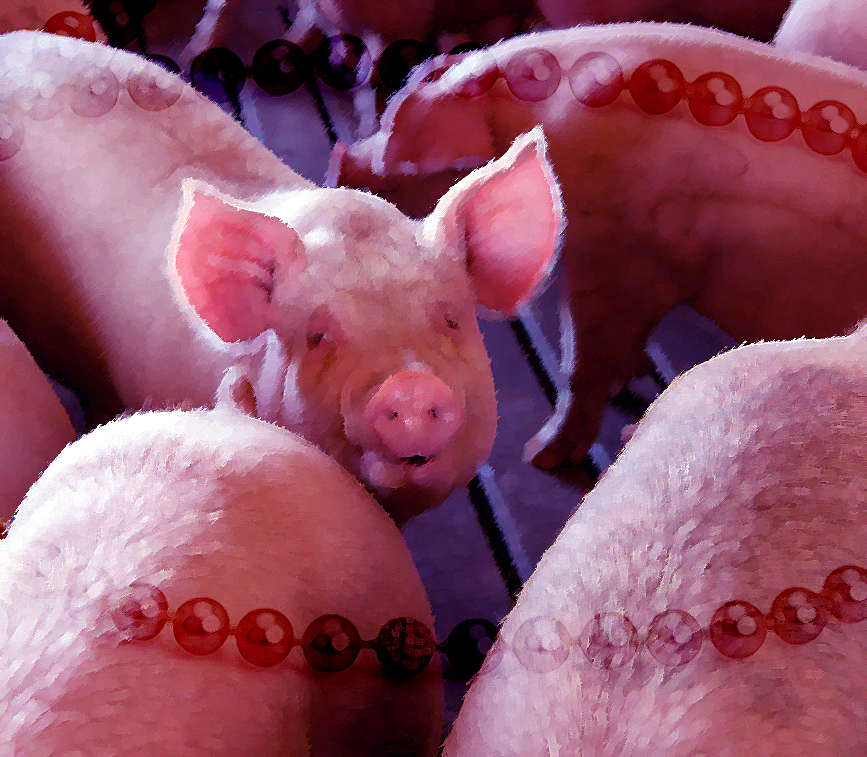 Ever burst into a room filled with family or friends, heart dripping with pearls, and just smell swine? Oh you can't see the pink snouts and cloven hooves, but you know they're there, lurking somewhere in the shadows ready to trample all over your shining new insight, brilliant thought, sparkling idea.

Yeah, I know the feeling.

It's a phenomenon all artists and creative thinkers must face eventually: a show down at the Small Thinkers Corral. It's not that our family or friends actually wish us harm or that they secretly have curly tails and pot bellies. It's more that when you light up with inspiration, you glow. That light can be overwhelming for some and blinding for others. If those friends, family members (or critics of any relation) lack light beams of their own, they're likely to want to turn yours down or — in some cases — just douse you with the cold, clear water of their "reality" 'til your light flame snuffs out.

I grew up in that environment, scared to death of expressing myself lest I be ridiculed or shamed or simply ignored. Mostly it came from the male members of my family, but there was never a lack of people who thought I was over-the-top, too dramatic, too intense, too sensitive to "make it" in the world, and they were free to let me know in no uncertain terms. So I shared the jewels of my insights and cast the pearls of my talents less and less, taking risks and facing rejection fewer and fewer times as I literally stuffed down my creativity, choking on unexpressed treasure.

Now before we bring in the weeping violins and pass around the Kleenex box, let me share with you two stories.

There's a 19th century fairy tale penned by Charles Perrault often referred to as Diamonds and Toads (sounding a bit like our bible friend Matthew, with his swine and pearls, eh?) and it goes something like this. A girl lives with her stepmother, who favors her natural daughter. Stepmother berates and humiliates our young heroine, insisting she do all the chores in the house, including drawing water from the well in the village which is a half day's walk away. One day, as the girl is drawing water, an old beggar woman asks her for a drink. She kindly pulls water from the well and hands it to the old woman. She is then rewarded by the old woman (who was a fairy in disguise) with a gift. Every time she speaks, diamonds, roses and pearls fall from her lips.

Well as soon as you can say "Anything you can do I can do better," Stepmother rushes her own daughter down to the well, hoping to be of assistance. Having been told it was a fairy who bestowed the gift, natural daughter and stepmother are waiting for a fair beauty. When a haggard beggar shows up and pleads for water, they disdainfully reply "get it your self and then move on. You're stinking up the place." The old beggar woman reveals her true nature and bestows upon natural daughter a gift befitting nature: every time she speaks, snakes and toads jump from her lips.

As you can imagine, in true fairy-tale style, our charitable heroine marries a prince (who of course loves her for her inner treasure and not her wealthy mouth) and natural daughter dies alone and rejected in the woods, even the snakes and toads refusing her company.

I was working on a manuscript of mine and stumped by several plot points. The script is near and dear, as it is the story of what has happened to me over the past ten years and therefore, is far more personal than a fictionalized piece. I discussed my issues with a writing acquaintance who proceeded to counsel me personally rather than professionally.

"Angi, what is your connection with all this trauma and drama? Is it necessary to have burning-bush experiences over and over again? Or could you learn in smaller, more quiet ways? Does your life need to be a theater?"

Not only had she not addressed my story and the professional concerns I was having, but she insinuated that both my story and my life were too big, too dramatic and that I might be a better person if I could settle for a smaller experience and expression.

Are we sensing a common thread here? Allow me to weave for you …

In my Jungian studies, I have learned that in any myth, story or dream, all the characters can be seen as components of one psyche. So even if Uncle Fred shows up in my dream and begins duct taping a pink poodle to the ceiling and pasting false eye lashes on his own nipples, according to Jungian analysis, Uncle Fred really only represents a part of my self. (As does the pink poodle but what it's doing with Uncle Fred and duct tape is up to my awake self to suss out.)

Using that theory, I see the step daughter in the first story as the conscious self — she's you, she's me, she's the artist trying to make her way in the world. Stepmother is the critic who deplores authenticity and beauty because she simply cannot understand it. She prefers the surface life, the ego, the realm of safety and conventionality represented by natural daughter, the one created in her own likeness, who is familiar and safe. When the step daughter meets the old woman at the well, she's really meeting her own unconscious pain and woundedness. That ugliness stands at the well and it's important here to note that water has often symbolized memory, consciousness and healing. When she is kind to her pain and ugliness, treating 'them' with respect, the wounds transform into Beauty (fairy) who bestows the gift of riches every time the Self expresses herself (resulting in the treasure of creativity).

So there I am, as we all are, living my myth when the stepmother (writer acquaintance) confronts me with accusations about my authenticity and my value. Seeking refuge from that inflicted wound, I go draw water from the well in my own consciousness, where I meet the old hag (my past wounds) bearing every wart, wrinkle and scar from the past … the past that told me I was too big, too loud, too intense for this world. It took me several months to work my way down into the well so I could offer the old woman a cup to quench her thirst. I journaled. I journeyed. I delved into my old pains with new insights, which eventually allowed me to extend the cup of kindness, showing love, respect and gentleness to a haggish, deformed past. In doing so, I have been gifted with grace, originality and the authentic pearl-of-great-price that comes with owning and loving one's true self, just as one is.

So back to the original question.

Ever burst into a room filled with family or friends, heart dripping with pearls, and just smell swine? Sure you have. And the most important thing after doing the work that creates the pearls, is to learn the fine art of discernment. I have come to love that word. It has a certain ring to it. Say it with me now: Discernment. Ah, yes, it rolls from the tongue. Like pearls.

Next time you have a brilliant idea, a shining truth, or even a half-cracked oyster, use that intuitive nose of yours to sniff out the situation. You can only smell the swine if you have identified them in your own psyche and comes to terms with them. When you notice you're near a trough or trucking through the mud, it's a good indicator to keep those sweet pearls to yourself. Enjoy them. Celebrate them. And soon a prince, a pauper, a jeweler or a pink poodle with an affinity for oysters is bound to happen by. You'll know who they are when they show up, if you use your friend Discernment. Then it's time to take out the pearls, share them, spend them, thread them on a vein of gold and string them 'round your throat. It's there they shine.