Messages from the Muse 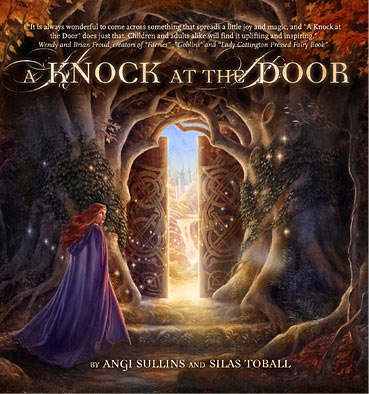 Angi Sullins is the author and creative mind behind A Knock at the Door, the little film that continues to make a big splash on the Internet.

Created as a valentine for the soul, the film has traveled the world several times over, passed via email from friend to friend in an enthusiastic word-of-mouth wildfire, inspiring over four million fans. She is also the founder and president of Duirwaigh Studios, a transmedia design studio creating products and services to inspire the power of imagination and creative consciousness.

After a decade in the inspiration business, Angi has taken her musings on the road. Described by her fans as a curious mix of Dr. King and Dr. Seuss, Angi delivers deeply soul-stirring messages with humorous, whimsical wit. Playful, poetic, bright, deeply expressive and armed with a standup comic's sense of humor, Angi is an engaging writer and an electric speaker. An early review of her first audio book Duirwaighs and Dreamfields: A True Fairy Tale deemed it "Alley McBeal meets Eat Pray Love meets The Secret." Her second book Flaming Muse, a collection of writings from her inspiration-blog Message from the Muse, showcases her storytelling talents, drawing comparisons to Clarissa Pinkola Estes, Liz Gilbert, and Anne Lamott.

She lives in Taos, New Mexico with her husband Silas, two guardian chihuahuas, a pampered mouse, and a pack of renegade faeries who haunt the hummingbird feeder. You can visit Angi at Duirwaigh.com.

Sullins marries inspirational messages with tangible life experiences and is founder, president, and one-half of the creative team at Duirwaigh Studios.

The Dream that Wouldn't Die

The Rules of Delightful Creation

The rules (that may be broken) for art, life, and delightful creation.

An artist vs critic phenomenom.

Who has opened your spiritual and creative doors? Who has guided, chided and goaded you into your unfolding?

What condition are your creative roots in?

Monkey Mind Goes to the Circus

How to write through Monkey Mind.

The Dream that Wouldn't Die 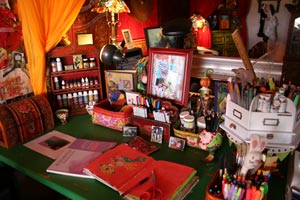 In 1995, I decided to help my mother find new and creative artwork for her gift gallery. As a child, I had loved the stories and images of Wonderland, Narnia, and Oz. As an adult, I found I craved the same sense of wonder so prevalent in my childhood, and felt there was a need for truly gifted artisans with a touch and flair for fantasy. Spending hours in the library and then in bookstores, I discovered the amazing work of storybook illustration, art dolls and vintage animation. I began questing for odd and often underground original works of art — those pieces that are rejected by the fine art world.

By 1997, our gift gallery was brimming with artwork and we began redefining our mission statement and our clientele. Our dreams became large and expansive, and so did our plans. We discussed the opening of not only an exclusive gallery, but an artist retreat, symposium and museum. Oh, the excitement of making a dream come true was upon me, and each day was full of hope and enchantment as we materialized our goals.

In July of that year, all our momentum came to a devastating halt. I entered a hospital for what was described to me as major but routine surgery, to alleviate a pinched nerve caused by a herniated disc in my neck. No problem, I thought. I'll be in and out of the hospital in 2 days and soon be free of pain. And best of all, I'll have three weeks off work to recuperate and work on the plans for the new gallery. So it with was a skip in my step and mirth in my heart that I entered surgery unit 6 on the morning of July 14, 1997. I would never be the same.

I awoke from surgery completely paralyzed. I could not move arms, legs, fingers or toes. I could not sit up, stand up or even roll over in bed. What's worse: no one could tell me why or what had happened to cause this condition. My surgeon, physician and a scurry of nurses came in and out of my room almost hourly and none could (or would) say a word. I was put through multiple exams, excruciating tests and scans, and 2 more surgeries. Sadly, this was not the worst part. While in the hospital, I was treated as a hostile witness in a fiery court case. Whether the physicians and staff were worried about a lawsuit or were just acting out of their own insecurity, I'll never know. But the angry, resentful treatment I experienced during my stay was FAR WORSE than my gloomy physical reality. I sank into a colorless, hopeless shape of despair while my dreams of art, expression and inspiration slowly seeped from my spiritual veins.

We lost our business. We lost most of our inventory. We lost the momentum and excitement of our expansive plans, but most precious, I found I was losing my Self: the very enthusiasm, energy and electric hope that made me, well … me.

And then something wonderful occurred. Weeks after being released from the hospital, as I sat in a wheelchair in my apartment, there came a knock at the door. It was the mailman with a package from England. I could not stand or walk to the door, nor did I have the dexterity to open the package. But once it was opened for me and placed on my lap, I could use my fingers and hands together to remove the contents. Inside was a healing friend, a playful puck in three-dimensional form. More specifically, it was a doll by Wendy Froud, who had sent the little messenger, according to her card, to make me well. He was to smile for me until I could smile for myself and was to care for me, until I could care for myself.

In that moment I KNEW. Healing was mine, and triumph, and success and the brightest of dreams made real. For he made me smile; he made me reach past my own pain to feel joy again. And in doing so, he made me aware that I held in my hands a portion of Divine Healing, all wrapped up in fur with a face and a smile.

Six months later, I could walk. One year later, I could walk almost completely assistance-free. And today, although I do not retain more than 80% motor and sensory skills, the fabric of my physical life and daily interaction is almost seamless.

More importantly, my dreams rebounded and rebounded again. I was able to do nothing about them for so long, that they simmered and marinated and became rich with the flavor of possibility. 1998 and 1999 were difficult and dramatic years, as I transitioned from victim to survivor to success, strengthened and encouraged by the yearning and longing my dreams had created.

With the passing of my grandmother in November of 1999, and the subsequent passing of the millennium, the time came for the dream to be rebirthed. I began communicating with artists and friends, planning with business owners and entrepreneurs, praying with angels and muses. Together with my family and several friends, we have formed what we feel is the beginning of a bright and blessed institution. A prelude, if you will, to an enchanting symphony.

Laying the groundwork for Duirwaigh Gallery to make its debut has been seven months of joy and five years of work. The dream of Duirwaigh has moved from hope to despair and back again. It has sustained physical paralysis, emotional rape, bankruptcy, betrayal, death and disillusion. And still it lives. It will not die. Like a phoenix rising from the ashes, it soars high and it soars free. And I am alive and well and full of joy because its wings beat in my heart.

It is with deepest pride and greatest pleasure that I present Duirwaigh Gallery to you. Today, an art gallery. Tomorrow, a museum. And in the days to come, an artist retreat: a place of respite and resuscitation, where artisans, collectors, teachers, students and aspiring artists can meet to share inspiration.

For what are we without Inspiration? Without the Hope to Dream and the Daring to Believe? We are mortal coils. But with Inspiration, and the Art that births from it, we are Eternal. We are Spirit. We are ALIVE AND WE ARE ONE.