Romancing the Cod: An Introduction to the Fish Rugs 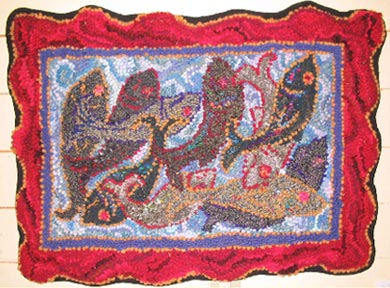 This morning I took a sharp knife and cut the fins off the grey and cream back of a salt codfish. I had bought the fish at the Halifax Farmers' Market from a Portuguese vendor a couple of weeks ago. It was the first time in years that I had seen a whole fish salted. I was taken aback by nostalgia and shelled out a hard-earned forty dollars, an astounding price for a fish. It reminded me of growing up in Freshwater where there were fish drying everywhere, hanging off the sides of sheds and lying on flakes in my next door neighbours' front yard. At that time we were more involved with the food we ate, especially the fish. We knew who caught it and who cured it.

I used the fish I bought to hang in my studio and I drew it a few dozen times, reacquainting myself with its lines and form, getting used to it again. Later, as I cut up that fish to soak for the following day's supper, it occurred to me how far I am from the fishery in just one generation. Both my mother and my father salted their own fish after it was caught by their fathers. As a child my mother spent summers on the Labrador with her family, catching and salting their own cod to sell for the winter's provisions. My father started fishing inshore in a small dory with his own father when he was twelve. Their fish was salted, dried and sold to market as well. It was both of my parents' livings; they were dependent on the fish.

As a child I always bought fish right off the boat at the wharf. I do not ever remember my mother buying a fish in a store; it always came directly from the fisherman. We would see the boats going by the bay in front of our house, and knowing they would arrive at the Jersey side wharf in about ten minutes, my father and I would get in our grey Volkswagen and go over to pick out a fish. It is not a fish story when I say the cod were longer than I was then. "Tommy cods," as my father referred to the smaller fish, were thrown back as if they were not fit to eat. Now of course our relationship with cod is much different. It has become an expensive delicacy with the disintegration of the cod stocks and the moratorium on fishing cod.

It was my parents' wish that I should be far removed from the fishery and that none of their daughters should worry on shore while men went off in boats to eke out a living. They had no romantic notions about the fishery. As soon as they were able they wanted to get away from it and all the hard work brought about by it. From as early an age as I can remember, I was indoctrinated with the idea that I would go to university and get an education. This was so that I would never have to gut fish at the Jerseyside plant, or pack crab, or haul traps. That is not the life our parents wanted for us, having barely escaped from it themselves. Nevertheless, for my father, the collapse of the Newfoundland cod fishery was a heartbreaking tragedy, a mismanagement of a precious resource.

Fish has always been a favorite meal of mine. As a child I caught trout and gutted them myself for dinner. I was always there when the caplin rolled in to carry a bucket up the hill. My mother would fry them and Mr. Bernie next door would dry them in the sun in his yard. Each little fish became a jerky that you could chew on for ten minutes as you walked down the hill. I 'd sometimes peek in the pot on the stove and see my mother's cod's head stew peeking back up at me with milky eyes. Later I'd sit with a plate of it, sucking on the bones, dipping the last bite of potato in the rest of the fish broth. I can still pan fry a piece of cod lightly dipped in flour and take it off the stove at just the right time so the fish falls apart in moist flakes with little beads of juice rolling around the edges. Fish and brewis, a delicious Newfoundland dish of dried soaked bread, salt cod smothered in onions and pork fat, has become the traditional Christmas Eve dinner for my family. But the fish I get now is bought flash frozen on a factory ship. The salt cod most often comes as bits in a little plastic bag, over-salted and dingy gray, not the light rich creamy yellow that a salt fish ought to be. I still remain connected to my family's long tradition of fishing by knowing how to prepare a good feed of fish.

The other link I have with the fishery is in my rugs. I have been inspired by our own family history, and by the simple shapes of fish. Whenever I hook fish, I think about how they used to look laid one upon the other in my mother's white porcelain sink. I know the peach underbelly of a trout and the colour of salmon flesh; fish have a lot more colour than grey-black. One of my favorite rugs was a lesson in just how simple my knowledge of the fishery really was. I had been inspired by a rug created by Rhoda Dawson, a designer at the Grenfell mission on the Northern Peninsula of Newfoundland in the early nineteen hundreds, who had hooked a very detailed rug of salt fish on a flake. Several years later, I decided to create a rug for myself of salt fish. I drew out the fish in a semi-geometric fashion and hooked them in simple, light colours against an aqua background. My Uncle Donald came to visit and I showed him the rug. He said "Sure, they're not cod. You got the tails split — a cod's tail is not split like that." He was right, of course. The man had lived for forty five years in New York, working on the high steel and had not fished in over fifty years, but he understood codfish in a way that I was never going to. I had been saved from the fishery, yet I can't get the need to remain part of it out of my system no matter how many rugs I hook. After all, it's only been a generation.

Next: Every Craft Grows an Art

A Poem from Deanna's Studio

Believe in all kinds of beautiful.
Know there is no such thing as perfect.
Be fearless with colour.
Only make rules you are willing to break.
Find the wonderful in other people's work.
Tell them about it.
Don't stick to what you know.
Draw every day.
Wear hats and flowers in your hair.
Remember yourself as a child.
Get a big box of crayons.
Teach others to hook.
Share your wool.
Hook with people you love.
Love the people you hook with.
Leave your hooking out to work on.
It's not a mess; it's an ancient art form.
Stamp your feet if you need to.
Hook patterns or design your own rugs.
You can be creative with either.
Go easy on yourself.
And last, but oh so important,
Dance in the kitchen whenever you can.

Deanne Fitzpatrick is a member of the Editorial Board of Rug Hooking magazine and has been the subject of a television documentary and features on national radio shows. More