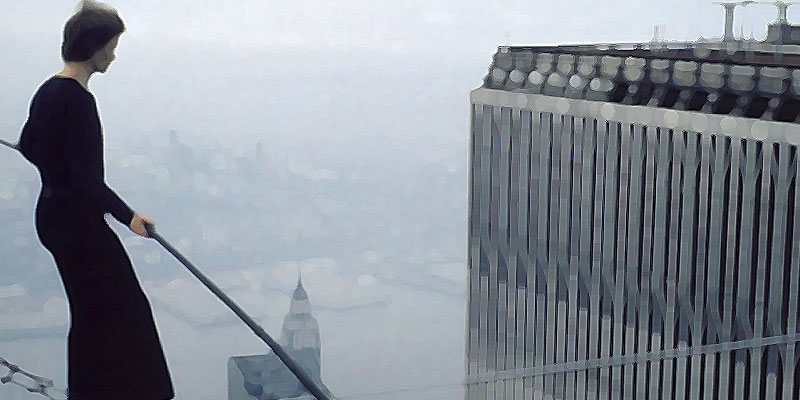 'Man on a Wire' Phillip Petit is an inspiration for our times.

“If I die, what a beautiful death in the exercise of your passion.” — Philip Petit

I heard a story once about a French man who in the 1970's walked across a tight rope that connected the Twin Towers. In mid air, an audience of New Yorkers gasped as he balanced back and forth. Somewhere in my realism I staked it as just a story with no accurate details, assuming that it never happened. Never make assumptions about what is possible...The story is absolutely true!

Philip Petit, a 24-year-old French man, walked across a wire between the towers in 1974. What he did raised that quintessential eyebrow from people that seemed to ask 'how the heck did he do that?' How did he feel safe doing that? The story is the basis for the Oscar-winning documentary, "Man on Wire."

Indeed Mr. Petit had a history of walking between things...in mid air!

When Petit first learned that the tallest towers in the world were being built in the early 70's, a seed was planted in the form of a dream. "When you have a dream, it's tangible...nagging...but the object of my dream didn't exist yet."

At this point, an 8-month long mission mounted to figure out how he would walk between towers. This is when an incredible amount of creative thought and collaboration took place. He rallied a group of French, Australian and American colleagues to help him. They flew back and forth between Paris and NYC. At the towers, they created aliases as construction workers to go up and down the guarded areas. They observed the ebbs and flows of the weather patterns. Back in France, they made miniature models of the towers and spent hours in conversation figuring out the internal plan of rigging a wire between two buildings.

When you watch the documentary, you will learn about their escapades and witness the feat of their triumph.

Looking at 2000 zen, I think of Philip as an inspiration for our times. He planted a seed to his dream, his excitement and passion garnered support and he made it happen. That is an exceptional layer of the story. Another layer is his fearlessness on the rope itself. There was no safety net, how could he possibly do it without one?! I could never do it without one....

This is the key!

Petit did have one. It was an internal one, a transparent one, even an external one held in the body of the clouds over head or the wind in his wings. There is an ethereal quality to the trust but the net was there and he believed in it.

As the man on wire explains, just short of receiving an Oscar for Best Documentary: "To me, it's so simple. Life should be lived on the edge. You have to experience rebellion. To refuse to taper yourself to rules, to refuse your success, to repeat yourself, to see each day, every year, every idea as a true challenge, then you are going to live your life on the tight rope."

Today, tomorrow, this year and this decade there is a choice to go out on the high wire of life. It will not be Petit's wire, but your own metaphorical one. You can climb up the flights of stairs, take the elevator or just fly your way up, but get there. Once you do, feel free to just step on the tight rope if you are ready. If not, what would make you feel safe?

Everyone has a safety net that is activated in every situation be it professional or personal. How big is yours? What is it comprised of? How how has it served you so far? What if it could be of more service to you? What would have to happen?

Next: On the Creative Life of Pina Bausch, Dance Theatre Performer & Choreographer