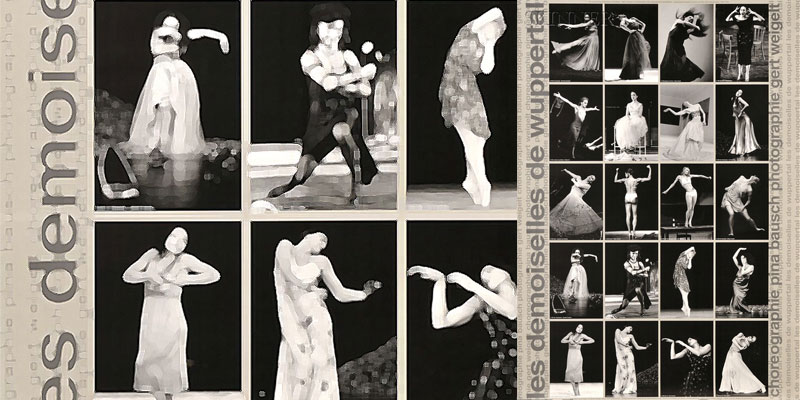 Pina Bausch and Leonardo da Vinci at the Goodwill

Since I was in middle school, I have had a very synergistic relationship with vintage shops, garage sales and sidewalk peddler products. Not sure how it could be that one day I'd be imagining some ambiguous silk chinese cocktail dress, and then I'd get an instinct to go to the Goodwill (a salvation army style thrift shop), and all of a sudden, it would be there. The one I had imagined. Besides no one, I am the only person that has such a rare existence with a thrift shop. It's clearly a conversation with destiny: Goodwill represents a space where my imagination materializes.

I go there to find things to repair, rip up and recreate. I go there to salvage treasures. I also call in creators from the past. I know this one seems like a stretch, but I have some evidence.

I previously wrote a piece on Pina Bausch whose work has stunned me, haunted me, left a trace embedded forever in my imagination. Recently I realized that Wim Wenders had produced a film in honor of her.

The day I saw this trailer, I had been thinking of Pina, and as I was driving by the Goodwill, I knew I had to stop in. Like a whisper-of-an-instinct of where to go, I quickly walked to the poster section and there it was. An original framed poster of the women of the Wuppertal Theatre, Pina Bausch's theatre company.

To me, it's highly unlikely that a poster like this is circulating regularly around Goodwill, untouched and only $20. In fact, I am so positive about it, I felt that feeling that I had been gifted with a present from the creator herself. Perhaps it was a recognition of the work? Or perhaps she knew she was on my mind?

The next evidence of said relationship is with Leonardo da Vinci. I had been reading of his contributions as a scientist of the arts and an artist of the sciences in Leonard Shlain's book, Art and Physics. I was driving by the Goodwill and I had that same little voice go off. It was clear: go to the magazine section. I went and guess what I found? A Leonardo da Vinci poster.

How is that I have been called by instinct to the Goodwill to find these little treasures? The beauty is that they could be meaningless garbage to everybody else, but for me there is clearly a greater message: Pina and Leonardo had their eyes on me too.

It made me think: what if there were creators from the past who you follow that also follow you? The one I refer to is a more transpersonal approach to following, something that Twitter could never compare to.

What if it took a little faith in believing that you are taken care of by the creative entities you most admire? How would things be different for you right now?