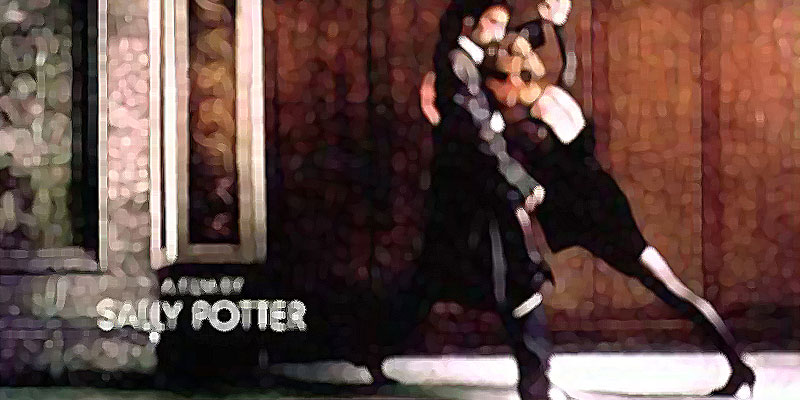 When a secondary project ends up coming to life.

Have you ever wanted to create something but got side tracked by another project? You are all nodding your heads.

Has it ever been that the secondary project ends up coming to life but you still have an intention to get the original project done? You might still be nodding your heads.

Do read on…I swear there is a point to this.

I'm a sucker for Tango. My perception of it is blissfully romanticized by my love for Astor Piazolla — the great Tango Composer and Accordion player. Black slick outfits, close contact between dancers and swift movements that leave you lingering for the next encounter…I'm all about it.

I was first drawn to Sally Potter's film, "The Tango Lesson," because of the magnificent key art (see image above).

The woman who is diving toward the chest of her dance partner is the Independent Film Maker and Director, Sally Potter, and this was the first film I had seen by her. You might know her for her other projects such as "Orlando."

Years ago I understood that the movie was about an artist who wanted to get away from London and got inspired to go to Buenos Aires to not only finish a film concept but got swept away — literally — by the art of tango. I had a particular focus then toward the tension-infused relationship between her and her dance teacher. There was this push-and-pull quality between the two. Who will control the tango: the teacher or Potter, the director?

In the "Tango Lesson," Potter talks about having writer's block on a film project. The premise was ambiguous but had to do with the underworld of a model or group of models (again unclear). We never knew what the title of the film was but we saw silent snippets that alluded to the intrigue. At any rate, this film came out in 1997 and in 2009 she released "Rage." I rented it recently and the story line had to do with a run-way model. At that point, it dawned on me: the project she was blocked about in "The Tango Lesson" was the movie "Rage." This was a total 'a-ha' moment! Potter, this established artist, perhaps truly did have writer's block, got sidetracked for good reasons but ultimately stood by her original project and made it happen…even if it was more than a decade later. Acclaimed artists do that too! Of course they do!

Does time really make a difference when you're called to do a project? Looking at her filmography, she has definitely been active in film from 1997-2009. You can imagine that life and other artistic endeavors do create and recreate the time-line on projects. In the case of Potter, it seems that they can often fuel an original project into existence.

If your agenda is flexible, you can leave yourself the possibility of manifesting your project in its own due course. Indeed there is always a back story to things, and if I could get Potter on the line, I'd have some serious chatter to sponsor with her on perseverance, the nature of time-lines in creative projects, etc. Since we are left to piece things together, I have attached a meaning to her projects that gives me perspective about my own and yours.

What is a project you have worked on that has been sidetracked? How open is your time-line? How would it be for you if it were brought to full fruition 10 years later than you expected?

Next: Rite of Passage for the Creative