An excerpt from Someday Is Today

Understanding how someone accomplished something can make an enormous difference in the life of a creator. By learning about the lives of people in a variety of creative fields, we can eliminate misconceptions and demystify the creative process. By learning about how the makers of things made their things, we can oftentimes see a path for ourselves.

It's good to know how hard it was for those who came before us. I think that we often see the creators of good and great things as somehow special — imbued with talent and power beyond our reach. Artists who ascended the mountaintop with grace and ease.

Sometimes this is true, but more often, it's simply dogged determination, a refusal to quit, a relentless drive to succeed, and dumb luck.

Knowing this can make our journeys easier.

Painter Frida Kahlo was in a serious bus accident at the age of eighteen. Confined to bed for three months following the accident, Kahlo began to paint as a means of passing the time. Her mother provided her with a specially made easel, which enabled her to paint in bed, and her father lent her some of his oil paints. She had a mirror placed above the easel so that she could see herself. Painting became a way for Kahlo to explore questions of identity and existence as her body healed.

She said, "I paint myself because I am often alone, and I am the subject I know best." She later stated that the accident and the isolating recovery period created a desire "to begin again, painting things just as I saw them with my own eyes and nothing more." Kahlo's moment of realization took place while recuperating in a hospital bed.

Zumba inventor Alberto "Beto" Pérez was a struggling fitness instructor and dancer who forgot to bring his regular music to an aerobics class one day. He happened to have cassette tapes of Latin dance music — salsa and merengue — and taught his class using them instead. In the improvised dance steps of that aerobics class, Zumba was born. Sometimes it takes an unexpected obstacle (and the combination of two different talents) to make something special.

Samuel Whittemore, age seventy-eight, was working in his fields on April 19, 1775, when he spotted a brigade of British soldiers sent to assist the retreat of forces from Lexington and Concord. Whittemore loaded his musket and ambushed the soldiers from behind a nearby stone wall, killing one. He then drew his dueling pistols, killed a second soldier, and mortally wounded a third. By the time Whittemore had fired his third shot, the British had reached his position behind the wall.

Whittemore drew his sword and attacked. He was subsequently shot in the face, bayoneted numerous times, and left for dead in a pool of blood. He was found by colonial forces, still trying to load his musket to resume the fight. Whittemore was taken to a doctor in the nearby town of Medford, Massachusetts, who declared that the man had no hope of surviving his wounds.

Whittemore promptly recovered from his injuries and lived another eighteen years, dying of natural causes at the age of ninety-six. He lived long enough to see the Constitution signed and the United States become a nation.

A monument stands in Whittemore Park at the northeast corner of Massachusetts Avenue and Mystic Street in Arlington, Massachusetts. It reads:

Near this spot, Samuel Whittemore, then 80 years old, killed three British soldiers, April 19, 1775. He was shot, bayoneted, beaten and left for dead, but recovered and lived to be 98 years of age.

Sadly, they got his age wrong. More egregiously, they did not use an Oxford comma. Still, not bad for a man who would've qualified for Social Security sixteen years before the confrontation took place.

Whittemore was not exactly a creator in the traditional sense, but it's a lesson in never giving up. Never thinking it's too late. Never losing hope that you, too, can leave a mark. Grandma Moses would've been a more apt and obvious example of this, but I love the story of Samuel Whittemore and try to tell it whenever possible.

But how about this one: Estelle Getty, born on the Lower East Side in 1923, wanted to be an actress from an early age but never thought she was good enough to succeed onstage. Instead, she found a job as a secretary after high school, got married, and raised two children.

At age fifty-one, after her kids were grown, she decided to study acting. She considered quitting many times but loved the dream too much to turn her back on it. Eventually she met local playwright Harvey Fierstein and asked him to write a part for her in his next play.

He agreed, writing a role for her in Torch Song Trilogy. It ended up on Broadway.

Estelle Getty was well into her fifties when she was finally able to quit her day job and support herself as a working actress. Torch Song Trilogy toured America for four years. When the play made it to Los Angeles, she was seen by producers who were getting ready to launch a television pilot featuring four retired women living together.

Estelle Getty never gave up on her dream, even when she didn't believe herself capable of making that dream come true. She didn't give up when most actresses her age were being written out of television and film. It took her a lifetime to make her dreams come true, which is how long it sometimes takes.

Peter Roget was a British doctor, lecturer, and inventor who suffered from lifelong depression and retired at the age of sixty-one. In addition to his more traditional professions, Roget was also an obsessive list maker from the age of eight, explaining that making lists helped him cope with his depression. Following his retirement, Roget spent all his time making lists of words and organizing them into categories by meaning.

His catalog of lists was published for the first time in 1852 when he was seventy-three years old. It was titled Thesaurus of English Words and Phrases Classified and Arranged so as to Facilitate the Expression of Ideas and Assist in Literary Composition. It's better known today as Roget's Thesaurus of English Words and Phrases. Peter Roget found a use for his lifelong passion late in life and, in doing so, created something that still exists today. Something that I have used more than once while writing this book.

There are many paths to and timetables for success.

I was lucky to have been awakened to the power of the written word by Mr. Compopiano back in the fall of 1988.

I was lucky to find a way of writing novels while bored in Boca Raton on a Wednesday night in February 2005.

I got lucky when my friends convinced me to say yes to my own question and take a stage in New York City and tell a story about my life in July 2011.

None of the success that spiraled from these moments could have ever been predicted.

The path to success is rarely straightforward. Many of us need to get lucky along the way. Sometimes that luck comes in the form of a misplaced cassette tape. Other times you're lucky enough to be spotted onstage by an up-and-coming television producer. Sometimes it comes in the form of a spouse, plucking a partially written manuscript from the trash can, dusting off the cigarette ash, and reading what would one day become a bestseller.

Sometimes your misfortune can lead to your success, as it did for Kahlo in the form of a near-fatal bus accident. When the world handed her lemons, she made legendary lemonade.

Knowing that the paths of most creators are not linear, nor are they simple, can be enormously reassuring on those days when all seems lost and the horizon seems impossibly far away.

You're not a unicorn.

Neither blessed nor cursed.

You're just another creative soul, journeying on a long and windy path to making something good and maybe great. There is no telling how long it will take you and how many bayonets to the chest you will have to suffer along the way.

But cheer up. You're walking in the footsteps of greatness. Just keep walking.

Matthew Dicks is the author of Someday Is Today and nine other books. ... 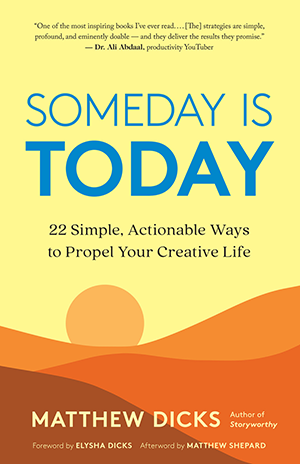 Excerpted from the book Someday Is Today: 22 Simple, Actionable Ways to Propel Your Creative Life. Copyright ©2022 by Matthew Dicks. Published with with permission from NewWorldLibrary.com.