Go beyond mere appearances to inspire writing in students.

I'd been teaching for six years when Stephen Dunning's Reflections on a Gift of Watermelon Pickle was published in June 1966. Because the book featured 114 modern poems accompanied by exciting photographs, it soon became a favorite with English teachers who wanted to teach poetry.

Many teachers, however, realized that when the photographs that appeared in Reflections were viewed apart from the poems, they were powerful incentives to writing. Other teachers discovered that the combination of a photograph and a poem triggered students' imaginations and helped to inspire writing.

The Return of Watermelon Pickle … Almost

As far as I know, Reflections on a Gift of Watermelon Pickle is out of print. But that doesn't mean that combining photos with poems is any less effective today than it was years ago. After all, grandma's famous chicken soup still cures colds, doesn't it?

Even though the photo and poem shown here didn't appear in Reflections, they're a good example of how that combination can help to inspire students to write either prose or poetry.

Like diamonds on black velvet,
Starlight dances on water.
Alone, I sit and think
Of life, and love,
And lesser things like
Who will win the Super Bowl next year?

In the photograph, the extremes of light and darkness suggest ideas that students can translate into writing. In the poem, the narrator introduces thoughts that many people share at one time or another. Together, the photograph and the poem can introduce ideas that will trigger students' thought processes and help to create many kinds of written compositions. The possibilities are endless.

Who Are These Guys?

And why are they sitting, alone, as if they were waiting for someone — or for something to happen? Why does one of the men appear to be calm and relaxed while the other man is tense and apprehensive? What is the significance of the darkness that surrounds the man on the left? Why is the man on the right as anxious as he appears to be? What are some of the differences between the settings shown in the two photographs?

You could ask students to imagine what either or both of the men's lives are like. Where do they live? What kind of work do they do? What are their families like? Why are they sitting alone on a sidewalk in a city? How would the two men respond if they were to meet each other? What secrets do they harbor?

Alternatively, you could simply let the students discuss what they see and feel when they view the photos before they write short stories, poems, or imaginative biographical entries. 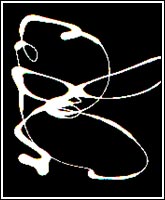 "Mickey Mouse is, to me, a symbol of independence." Those are the words of Walt Disney, the American cartoonist and filmmaker who created Mickey Mouse and a host of other memorable characters.

Mickey made his debut in Steamboat Willie at the Colony Theatre on November 18, 1929, went on to star in 120 different cartoons, and also starred in "The Mickey Mouse Club" television show during the 1950s. Amazingly, Mickey is still alive today, ninety years after Disney created him. He appears on the "Mickey Mouse Clubhouse" on the Disney channel, and on the Internet as well. What's more, he's also the chief greeter at the Disney theme parks. 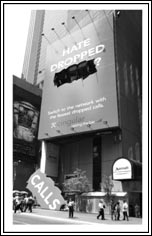 Truth to tell, the image shown at the left doesn't resemble Mickey Mouse, but it does offer students an opportunity to reflect on symbols as opposed to signs.

The image on the right depicts a sign. Using similar images, you could ask your students to discuss the difference between symbols and signs before they write about them using examples they have photographed or clipped from newspapers and magazines.

Perhaps the students could compile annotated anthologies or create bulletin boards based on images of symbols and/or signs.

Mary Lee Meyer is a Prairie Lands Writing Project Technology Liaison working as a PLWP teacher consultant. See her blog (writingwithtechnology.edublogs.org) for examples of some of the activities she demonstrates at her writing workshops for teachers.

In one activity, Meyer suggests using comic strips or political cartoons from newspapers and magazines to inspire student writing. "Scan an image into Microsoft Paint™ or another photo editing program and erase the words in the bubbles," she writes. "Then print copies and ask the students to discuss the cartoon or comic strip in small group settings." Meyer points out that this exercise helps students develop writing assignments that use dialogue.

In another activity, Meyer asked workshop participants to take a working lunch during which they recorded at least five digital photos that they thought they could use in a writing assignment. "This was a two-day class," she writes, "during which participants were required, among other things, to use one of their images appropriately in a written piece."

This assignment could easily be completed with students at any level in just one day if the students are directed to come to class with photos they had already taken.

At the Ottawa Elementary School, Petoskey, Michigan, Alisa Santii uses family photos to connect with her students' lives. "I ask the students to bring in photos showing family-oriented activities," she writes. "Then I encourage them to write descriptive paragraphs that reveal more than just what is plainly seen in the photos. To this end, we urge them to generate ideas in terms of who, what, when, where, and how."

In another activity, Santii uses postcards or photos of various places as triggers for descriptive paragraphs. "After they write their descriptions," she concludes, "the students read them to their classmates who must then draw pictures based on what they saw."