If you're as long in the tooth as I am, you can probably remember Patti Page's rendition of "How Much Is That Doggie in the Window?" Page recorded the song on December 18, 1952, and within a few months it became Number 1 on both the Billboard and Cashbox charts.

And you can probably remember James S. Tippett's "Sunning," a poem that appeared in one of his children's books, A World To Know. 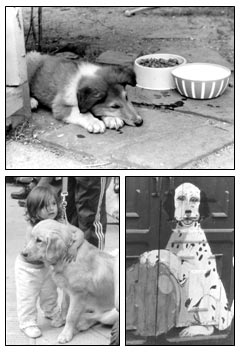 Truth to tell, Tippett's poem doesn't contain simile, metaphor, irony, allusion, or any of the other literary devices that are found in more sophisticated works. But that really doesn't matter. Together with one or more photos of dogs like those shown here, simple poems like "Sunning" can easily inspire students at all levels from elementary school through college to write many different kinds of compositions.

Who are some famous dogs that have appeared in literature, on television, and in films? What characteristics do dogs possess that make them desirable pets? In what ways can some breeds of dogs be helpful to handicapped human beings? How have dogs proven to be helpful in the military? In law enforcement agencies? How has a dog played an important role in your life or in the life of someone you know?

The questions cited above are just a few of many you can ask students as you encourage them to write either expository or creative pieces. What's more, if you simply want to allow your students' imaginations to guide them, you could always show them photos without comment.

The Case of the Fragmented Photo

Most photographers would wince at the thought of cutting a perfectly good photograph into several parts. And most teachers would wonder how anyone could possibly use a fragmented photo to teach point of view in fiction and in writing.

But that's not the case with Kelsey Maki, an adjunct professor at Brookdale Community College, Lincroft, New Jersey.

"After I cut an 8 ½ x 11-inch photograph with diverse elements into numbered pieces," she writes, "I give a different piece to each of several students." Then Maki asks the students to create a fictional character and write a scene in the first person from that character's point of view. Maki also directs the students to consider the ways in which a character's desires color his or her perception of place.

At the conclusion to the exercise the students assemble the parts of the photograph to see the third person, omniscient "big picture" scene. "This activity," concludes Maki, "helps the students realize that a setting is never an evenly focused, objective portrait, but rather a reflection of a character's physical point of view and physical state."

"Photo essays tell stories with pictures in ways that words cannot," writes Kathy Miller, a teacher consultant at the Prairie Lands Writing Project. In one of her photo-related writing exercises, Miller directs her students at West Platte High School, Weston, Missouri to select three photo essays from the Internet, study them, and analyze them in terms of written responses to such questions as:

In another exercise, Miller uses Brian Lanker's I Dream a World as a source of photos of African-American women. "I direct students to select a photo, study it, and relate how the woman in the photo they chose is like them or different from them," she concludes. 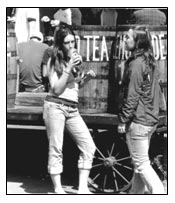 What could the two teenage girls depicted in this photograph be discussing? It's probably true that simply showing this photo to teenage students will trigger enough ideas for them to write many different kinds of compositions.

But if that doesn't work, you can always conduct a class discussion centered on teenagers. If, for example, you were to ask your students to write about their relationships and/or problems with their parents, their friends, or other important people in their lives, you'd probably generate more ideas than you can count.

Next: How to Connect Seeing with Writing