Reflect & Write: The Bridge and Bridge to Anywhere

Personifying the bridge to establish connections. 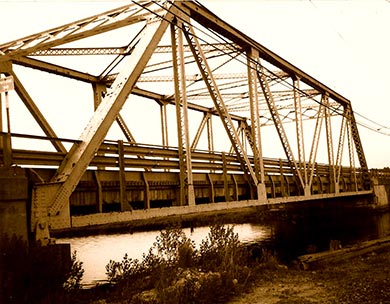 Under construction from 1933 to 1937, San Francisco’s Golden Gate Bridge is one of the most famous bridges in the world. In fact, it’s been declared a modern Wonder of the World by the American Society of Civil Engineers. Not all bridges, however, are majestic enough to earn such praise. But even the humblest bridge can help to trigger ideas that inspire either poetry or prose.

Consider, for example, the modest bridge shown here. Located in Westport, Connecticut, The Singing Bridge has stood for many years. “I photographed it a few years ago,” writes curriculum and instruction specialist and Florida Council Teachers of English President Kym Sheehan, “and then one day while looking at it I decided it was time to write.” In 2010 Kym was the winner of the National Council of Teachers of English Intellectual Freedom Award (2010).

The Humble Bridge That Sings

Together with such keywords as music, link, odor, darkness and the following words by the poet Longfellow: “I stood on the bridge at midnight,/As the clocks were striking the hour,” Sheehan’s poem about an ordinary bridge offers many opportunities for discussion leading to the creation of written works.

We named it The Singing Bridge.
Its small expanse connects and divides us.
Spanning the creek that leads to sleepy coastal towns,
It’s been silver, gray, and green.
Peeling layers of paint are speckled with rust,
While starbursts of burnt sienna
Surround the rivets holding it together.

Oh, but it still sings!
When we drive across, its metal floor serenades us.
As we bounce, it hums louder and louder.
Then SMACK! We hit pavement.

Once across, a quick left and we park by the docks.
The odor of brackish water fills our nostrils.
We ignore the “Live Lobsters” sign and trudge
Down the bank
To the water’s edge.

High tide with no boat traffic.
The surface water glistens;
But there’s darkness below
As a breeze caresses the bridge,
While all the while it sings
And makes beautiful music.

A Bridge Between People

Elizabeth V. Best, Ph.D., is the 7th Grade Language Arts Team Leader at the Westport Middle School, Jefferson, Kentucky She wrote her poem "Bridge to Anywhere" during a National Writing Project Resiliency Conference a few years ago. “During the lunch time cruise, the Belle of Louisville sailed pass the Big Four Bridge,” she writes. “As my ruminations morphed into images of me as a sort of bridge between family and friends and students, the poem took shape. By the time we docked, the first draft had been completed. I performed the poem that night at the cultural Open Mike Session.”

I am a bridge that leads to here or there,
A pathway that extends to anywhere.
I shake with winds, but still I stand.
Should you lurch and fall,
Embrace uncertainty, for you can only slip
Between the creaking planks of your former self
And land on a new level with me.

Beyond the view of my highest truss,
Highways spawn, luring you away
Into detours and roundabouts
Unworn tracks lead you to the stillness of inner spaces;
Back to me through sun-mottled thistle and bracken.
Still, I stand absorbing ebb and flow:
Echoes from the much traveled roads.
I give passage to climbing aspirations and grounded realities.
I rise, buttressed and riveted yet flexible.

I feel passion swirl around my girders;
I hear needs and doubts and roblems.
I witness memories dredged from
Hopes trapped, netted, and choked
By too much think and see weed.
I extend myself above this undertow of daily hassle,
So tread water,
Reach out,
And you will touch me.

Writing in the first person, the poet personifies the bridge to establish connections between herself and the people around her. “Reach out,/And you will touch me,” she concludes. As a follow-up activity, students may choose to develop similar or different themes by personifying an inanimate object.

Next: Rap as Poetry

"The Bridge" and "Bridge to Anywhere" originally appeared in Reflect and Write: 300 Poems and Photographs to Inspire Writing by Hank Kellner and Elizabeth Guy (Prufrock Press, 2013). Photo by Kym Sheehan.