Most photographs of people show their subjects facing the camera. But others capture their subjects from the opposite point of view. When that happens, the thoughts that come to mind can initiate many different kinds of written compositions. 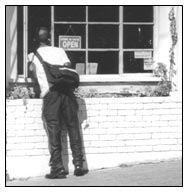 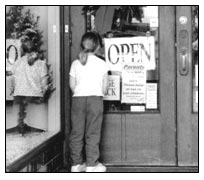 In these two photographs, for example, students can easily perceive several similarities. Both photos show figures looking into what appears to be a darkened store. Both reveal signs that proclaim that the stores are open. Both reveal their subjects from the rear rather than from the front.

At the same time, the photos reveal several differences. In one of the photos, a man is the apparent subject. In the other photo, the subject is a girl. What's more, the man is looking into an open window while the girl is looking through the glass on a closed door. Finally, the exteriors of the two stores into which the subjects are peering are quite different.

That said, student writers should be able to point out even more similarities and differences between the two photos before they develop papers based on comparisons and contrasts.

You Don't Always Have to Be Directive 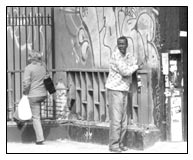 One of the nice things about using photographs in the classroom, however, is that teachers don't always have to be directive when they use them to inspire writing. Many times, simply asking a few leading questions can stimulate students' imaginations.

In this street scene why is the woman standing with her back to the man? What is she carrying in the white bag? What is she looking at? Is she waiting for someone? Is she aware of the man standing behind her?

What can you tell about the man by the expression on his face? Where is he coming from? Where is he going? Why is he standing where he is? Is he waiting for someone? What is he looking for?

These and other questions will usually help even the most hesitant writer overcome his or her reluctance to write. 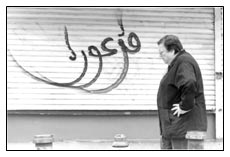 When students work in groups to share ideas and responses, they can often develop interesting and even exciting ideas. One way to accomplish this is to divide a class into groups of four or five students, distribute copies of the same photograph to each group, and then assign a different task to each group.

When you sense that the members of the groups have exhausted their ideas, you could ask a representative of each group to report to the class as a whole before you direct the students to write either creative or expository pieces based on the information they've shared.

Signs Can Be Confusing 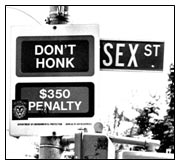 As you stroll Houston Street in the East Village of New York City, you find yourself approaching Sex Street. Only in New York you think as you continue on your way. But after you take a few more steps, you see that you're really approaching Essex Street.

"If that's true," you ask, "why did the sign seem to read SEX ST?" Then you realize that the DON'T HONK sign blocks the first two letters of the ESSEX ST sign.

If you show this photo to a group of students, you're sure to initiate more than a few chuckles. At the same time, however, you can point out that one can find literally thousands of misleading, confusing, humorous, quirky, and even ominous signs almost anywhere.

Another good example of an interesting sign is the one that appears outside the San Francisco Giants baseball stadium. "Watch Out For All Flying Objects Not Limited To Baseball Bats" it proclaims. Using this statement as a springboard, you could initiate class discussion based on violence as it occurs in hockey, football, soccer, and other sports before you assign written compositions. 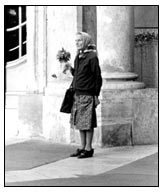 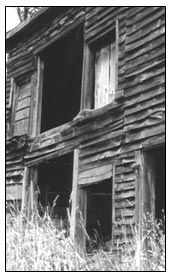 Each of the images shown here has the ability to initiate powerful responses in the minds of viewers. In the first image, for example, a viewer might sense apprehension. In the image that shows the old lady with flowers, loneliness might come to mind. The third photo might generate feelings of mystery or danger.

You can capitalize on this ability by showing your students three or more carefully selected photos and asking them to record, in one word, the first thought or emotion that comes to mind when they view each photo.

After they've recorded their impressions, you can ask the students to share them with their classmates, while at the same time telling what there is about the photos that made them feel as they do.

Finally, you can direct the students to write stories or poems based on one or more of the ideas they've shared.

"Now that we're in the digital age," writes Pat West, an instructor at Savannah Technical College, "I have my students in my college freshman composition class take photographs to support an observational writing exercise. Then we conduct campus writing marathons to get the students familiar with the process." West also uses family photos to help generate writings about heritage. In another exercise, she sparks critical thinking by showing students Henry O. Tanner's painting The Banjo Lesson and asking the question, "Who is teaching whom?"

©2009 Hank Kellner. Photos by the author. Poem by Jerry Kato. All rights reserved.

Next: Why Do People Respond So Enthusiastically to Graphic Images?