Students have endless digital images that can trigger writing assignments.

Go Google! If you Google the phrase "photographs and writing," you'll discover an astounding 23,400,000 entries for that topic. That's enough to keep you busy for the rest of your life and beyond — if that were possible.

Obviously, I couldn't sample more than just a few of the websites cited in Google, but I did find this one that's especially helpful to anyone who's interested in using photographs to inspire writing in the classroom.

According to the unnamed author of this "Learning Page" from the Library of Congress, some photographs can help to launch "projects that will develop visual literacy and creative writing skills," while others "lend themselves to expository writing."

In the section of the article that deals with creative writing, the author presents a photograph of five students who are on a field trip, directs the students to select one of the students shown in the photographs, and then asks such questions as: (1) How old is the student? (2) Has the person you chose been on an adventure like this before? (3) What unexpected events occur on the trip? (4) Are friends along on the trip? (5) Is there someone in the group the student dislikes?

In the expository section of the article, the author presents a simple, uncluttered photograph of a sand dune and points out that "…in writing about a sand dune, an essay might include the definition of a dune, an account of where dunes exist in the world, the kinds of animals and plants that live among the dunes, and an assessment of the human impact on sand dunes."

On a more personal level, today almost everyone owns a digital camera. Except for a few diehards, gone are the days when people waited anxiously for rolls of film to be developed and prints to be made. Now, as if by magic, images appear instantly to be downloaded, stored on hard discs, and printed at the drop of a sombrero. 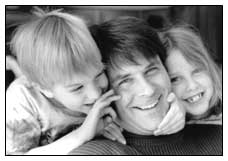 This means that most students probably have collections of hundreds, if not thousands, of digital images that can trigger writing assignments. Consider these two photos, for example. A student at almost every level could have created them. And the photos could easily trigger any number of questions designed to inspire writing. For example: (1) What were the conditions under which the student photographer created the photos? (2) What were the reasons for creating them? (3) What was happening while the student photographer snapped the photos? (4) In what way are the people in the photographs related?

Indeed, the number of questions you can ask is limited only by your imagination and by the imaginations of your students.

Alternatively, you could simply show the two photographs without comments or questions and ask the students to respond to them based on their unspoken thoughts and their feelings before they write their compositions. 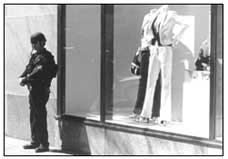 This photo is a good example of a photo that reveals little but says a lot. Almost in silhouette, a uniformed police officer wearing a helmet stands near a display window. Part of a shadow appears behind the officer.

A headless mannequin clothed in white stands framed in the window to the officer's left.

Some students will want to discuss the contrasts between the officer and the mannequin; the similarities between the positions in which the two are presented; and the helmeted officer as opposed to the headless mannequin. Other students will want to create narratives featuring the two figures. For example, what would happen if the headless mannequin somehow morphed into a living person? How would the officer respond to such a startling event? 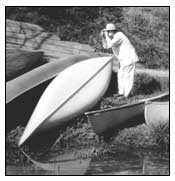 Photographs that feature people involved in some form of activity always elicit interesting verbal and written responses from students. In this photograph, a woman leans forward at what appears to be the shore of a lake or river as she trains her camera on something or someone we cannot see. On each side of the frame, several canoes rest on the shore.

Who is the woman? How old is she? Is she married or single? Does she have a companion who's waiting outside of the scene? Who or what is she photographing? Is she a professional photographer or an amateur?

How Some Master Teachers Use Photographs

After having students respond to several photos in terms of the five senses, Lehigh Valley Writing Project Co-Director Kristy M. Weidner-Gonzalez has the students write short poems in which each line reveals one of the senses. Then the students take a walking tour of the school and surrounding neighborhood during which they photograph their favorite places. Using the images they produced, the students revisit the idea of senses as they write about what they had experienced when they created the photos. "The second time around has much more meaning for the students," writes Weidner-Gonzalez, "because the places they photographed were much more personal and held certain memories for them."

As a Teacher Consultant for the Illinois State Writing Project and an English teacher at Central Catholic High School in Bloomington, Ann Cox uses photos to teach characterization. After giving her students a magazine photo of a person, she asks them to write a character sketch of the person. Then she provides a scenario and directs the students to describe how their characters would react and why. Finally, students share their writing with the class and discuss their motivation.

At the Prairie Lands Writing Project, Technology Liaison Mary Lee Meyer conducts workshops for teachers at which she emphasizes the use of images to inspire writing. "About 15% of the student population has low verbal skills," she wrote in a recent workshop handout. "Using images to invoke responses helps that population." Meyer pointed out, also, that images "…require students to use their powers of critical analysis when writing."

Among other things, in her workshops Meyer urges teachers to help students:

Next: Contrast in Writing, Subjects