Use Photos as Writing Prompts with Students

Most students don't realize how powerful their imaginations are.

Most students don't realize how powerful their imaginations are. But when they're introduced to visual images like the one shown here, even the most reluctant writer can gain inspiration.

One good thing about using photos to encourage writing is that there are times when simply viewing them without written prompts can free the imagination and unleash a flood of ideas. In the photo shown here, for example, the contrasts between the bright and dark areas provide a sense of mystery that suggests many possibilities for writing.

Sometimes, however, the imagination needs a little help to get it going. That's when written prompts can help students overcome whatever hesitancy they may have.

During class discussion you could ask questions that will cause students to express themselves freely in writing. Why is this man standing alone in a place that seems to be deserted? Could he be in danger? Is there someone lurking in the shadows? Why isn't there anyone with him? What is he holding in his hand? Where had he been before he arrived at this location? Why is his head bent forward? What is he thinking? What would a passerby be thinking?

The Amazing Adventures of Avenger Woman

This photo is supposed to show a brand new superheroine named Avenger Woman, but it's really a photo of a section of a mural in San Miguel de Allende, Mexico. Of course, you could use almost any other similar photo if you if you want to have some fun while encouraging your students to create fanciful compositions.

Not as well known as Wonder Woman, Supergirl, or Cat- woman, Avenger Woman is said to be a descendant of the Aztec god Quitzelpickelpetal. By day she is an English teacher at a high school, where she is known as Ms. Consuela Hernandez. By night, she fights crime all over the world.

Avenger Woman's last amazing adventure took place at the mall in Anytown, USA, where she thwarted an attempt by the evil Doctor No-No to kill everyone at the mall by releasing poison gas into it.

After conducting a class discussion based on superheroes and superheroines, you could ask your students to write descriptions of Avenger Woman in which they depict the clothing she wears when she is a teacher as contrasted to the clothing she wears as a superheroine. Students may also discuss Avenger Woman's physical abilities, as well as any other extraordinary super powers she has.

Students may then conclude their pieces by describing the battle at the mall and its outcome. 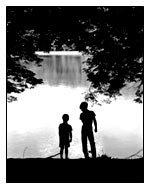 If you've read the first, fifth, and seventh articles in this series, you've seen how powerful a photo-poem combination can be.

Here's another example of one that's sure to inspire students of all ages and help them overcome their reluctance to writing.

Slowly,
The fog rose from the lake
Where we stood a century ago.
Quickly,
The time passed
As we moved beyond that place.
Brightly,
The sun shines on the lake
Where I wait and think of where you are
Today.

Most of the time, all you have to do to motivate your students is to show them a photo-poem combination without comment. But if that doesn't work, you can always suggest possibilities for them. You can, for example, ask them to describe a friend or relative they haven't seen for several years in terms of that person's physical, mental, and emotional characteristics. You can also encourage them to reveal why their relationship with their friend or relative was important to them.

At Southwestern Oklahoma State University, Valerie Reimers cites noted photography critic and historian A. D. Coleman's love of "found" photographs, which he sometimes picks up inexpensively in antique stores. "In conjunction with the idea of 'found' photographs," she writes, "Coleman suggests that writing workshop participants bring favorite photos to class." Then the students exchange photos and write about their borrowed photos as if they had just found a very interesting photo and are describing it. "Looking at someone else's photo brings attention to details that might be ignored as too familiar in one's own favorite photo," Reimers concludes. Students then share what they have written about each other's photos before they write about their own images.

English teacher Joann Garbarini shows her students at Irvine High School in Irvine, California photographs of different towns and asks them to pick one they would like to write about. She then instructs them to imagine what the town they chose is like. "They must include descriptions of ethnicities, social class, jobs, relationships between neighbors, the education system, the town's history, and anything else they can surmise from the photograph," she writes. To conclude the exercise, Garbarini directs the students to write about their own town and compare and contrast it to their imaginary town.