The Power of the Visual Evokes Meaningful Writing

Inciting a diversity of perspectives on closeness and aging.

Here in part is what Joe Milner, Ph.D., Professor of English Education at Wake Forest University wrote about using visual images to inspire writing. "I know from my own classroom experience the power of the visual to evoke meaningful writing. When the provocative and often delicate poems in Reflect and Write are paired with perfectly selected artwork and accompanied by thoughtful quotations from a diverse range of wonderful thinkers, success is inevitable."

Below are two examples of poem-photo combinations from the book that are representative of the power of poems and photos to inspire writing. Both poems are by Kym Sheehan, Curriculum and Instruction Specialist, Port Charlotte, Florida; President, Florida Council Teachers of English. In 2010 Kym was the winner of the National Council of Teachers of English Intellectual Freedom Award.

The Ties That Bind 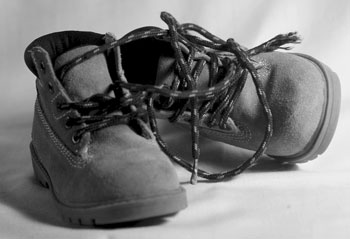 This poem and its accompanying photograph present the idea of a close relationship between two people. The words "wet boots," "peace," "friend," and "foe" suggest, perhaps, an involvement with the military. Is the poem discussing the bond between soldiers or marines? The quotation that accompanies it in Reflect and Write—"I've noticed nearly all the dead were hardly more than boys" by Grantland Rice—suggests that this is the case.

Not all readers will agree. Some will see other implications and use them as a basis for their writing. For example, if you ask students to think about everyday objects they can use to help illustrate a relationship with someone close to them, you'll initiate a diversity of responses that can lead to many different written compositions. 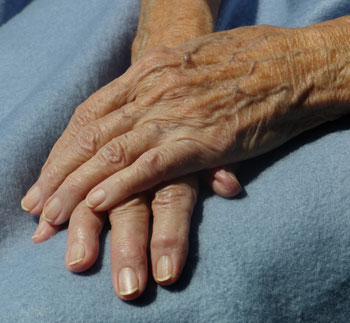 Fragile spindles lay at rest after years of toil.
I miss the snapshot look of
left hand atop the right.

The yellow wrinkled mass became one.


Her hands were neatly trimmed,
but no manicure here.
Each scar and wrinkle represented
a day of hard work.

Her fragile hands rested on
the blue crocheted blanket
that shrouded her knees.

For the most part they lay motionless
A twitch here, a slight movement there
Those long slender fingers lost their
strength long ago.

Gone too is the skin's elasticity
Like the blanket, the skin drapes across its subject.

Cold hands—warm heart
Movement toward the teacup is viewed as slow motion.

The clinking cup against the saucer
highlights the lack of control.

Drops of tannic acid dot a trail from table to lap.

The cup shakes as if the earth were moving.

Another set of clinking sounds signals the end of activity.

Henry Wadsworth Longfellow once wrote: "It is autumn; not without, but within me is the cold. Youth and spring are all about; it is I that have grown old." This powerful combination of photo, poem, and quotation is sure to initiate spirited discussion that will inspire compositions based on the theme of aging.

Next: Isolation and Education

"Intimacy" and "A Snapshot Look" originally appeared in Reflect and Write: 300 Poems and Photographs to Inspire Writing by Hank Kellner and Elizabeth Guy (Prufrock Press, 2013).