How to Connect Seeing with Writing

Discover convergences between images and texts; dreams and poetry.

If you're like me, you probably have a love-hate relationship with your computer. On the one hand, it can sometimes drive you crazy. On the other hand, it allows you to do things you couldn't easily do otherwise. For example, in less than a second you can convert a positive image to a negative one. And after you've done that, you'll be able to use your negative image in many different ways to help students overcome their reluctance to write.

For example, you could combine your image(s) with a poem to stimulate group discussion that will lead to written assignments. You could ask your students to write about one or more of the dreams they may have had. You could encourage them to speculate as to the meaning of dreams. Or you could simply show them a "dream" photo linked to an appropriate poem and allow them to write whatever comes to mind. 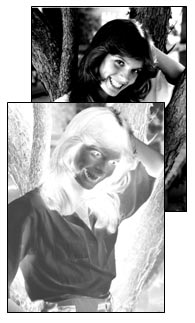 A dream slipped into my room
The other night while I slept.

"Who are you, dream?"
I asked softly.

"Then stay with me,"
I whispered.
"For if it's true
That you are me,
Then surely I am you."

How to Connect Seeing with Writing

Valerie Reimers is a Professor of English in the Department of Language and Literature at Southern Oklahoma State University. Reimers has developed an assignment that asks her students to discover convergences between visual images and verbal texts as they create both. First, she directs them to create photographs and, without looking at them, immediately write journal entries describing what they saw and hoped to capture in the photos. "In this way," she writes, "the students connect seeing with writing."

A few days later, Reimers directs the students to view printed versions of their photos, describe in writing what they see in their images, and compare/contrast their descriptions with the journal entries they had written earlier.

For the third and final part of the assignment, Reimers requires the students to submit a portfolio consisting of three sets of photos and written entries for evaluation and to share with their classmates. "Doing well on this assignment," she concludes, "doesn't depend on photographic skills. Rather, it depends on the careful choosing of subjects and the effort put into writing about them."

To receive a more complete description of this assignment, contact Dr. Reimers at valerie.reimers [at] swosu.edu.

In the Humanities Division at Fullerton College, Fullerton, California, Bruce Henderson uses iconic photos created by photojournalists during the Vietnam War to stimulate students' thinking and writing. "One of the images I present is the image of a Buddhist monk who has set himself on fire at a Saigon intersection," he writes. "This leads to a discussion about the nature and effectiveness of protest, as well as to an inquiry into the situation(s) about which the monks were protesting." Henderson also uses the iconic photo of the national police chief of South Vietnam executing a bound "suspect" during the Tet offensive, as well as the unforgettable photo of a naked girl fleeing her napalmed village to stimulate discussion and writing in his classes.

Mary Lang is an Instructor in the English and Humanities Division at Wharton County Junior College, Richmond, Texas. Lang directs her students to bring in 3-5 photographs from magazines. Then she asks them to choose a photo and use it to write a narrative or a series of narratives based on the image they have chosen. Occasionally, instead of asking the students to choose a photo, Lang creates a lottery in which the students "win" photos other than those they have selected themselves. "This has worked very well," she writes. Lang indicates that she uses this technique to encourage students to write not only narratives, but also other forms of writing. "For example," she concludes, "I've found that it works very well as a journal assignment."

In her classes at California State University at Monterey Bay and at Cabrillo College, Barbara Raney directs her students to read Richard Rodriguez' essay about a photo display in San Francisco. "In this essay," she writes, "Rodriguez asserts that anyone with a camera can create meaningful images." Then Raney shows the students photos of her grandparents, aunts, uncles, and other relatives and asks them to write memoirs based on photos of their own relatives. "The students do a good job of speculating about how/why their subjects changed since the photographs were taken," she reports.

Sometimes you don't need a written prompt to trigger ideas that lead to written compositions. Here's an example of how a member of a senior citizen's writers' group responded to the photo shown here.

"This photo took me back to the days when my kids and I would spend hours searching for sharks' teeth along the sandy shores of Jacksonville Beach in Florida, or back to any number of beach memories that are strung throughout my early years. How well I remember other days in Atlantic City when they had a horse that jumped off the Steel Pier. But that was years ago."