Reflect & Write: Skateboarding; The Dog with No Name

Thanks to the digital revolution, graphic images surround us. No matter where you turn, a constant bombardment of posters, billboards, photographs, televised images, and more seems to assault your retinas. Seen from one point of view, this flood of images can easily overpower the senses. But from another point of view, the same images can be used to inspire writing both in and out of the classroom.

A student of psychology, astronomy, and philosophy at Massbay College in Wellesley, Rose Scherlis has written "four published articles and one published poem for the Somerville News art section, which is a branch of the Boston Globe." Below are two other Scherlis poems that appeared in Reflect and Write: 300 Poems and Photographs to Inspire Writing.

Here's a powerful example of a poem-photo combination that can inspire unlimited possibilities for writing. In the poem "Skateboarding" colorful images swirl and converge until the world blurs and the skater's mind becomes receptive to new ideas. The swirling lines and shapes on the accompanying photo add to the effect. 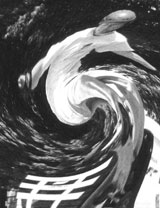 Sometimes I glide, soar, weave
Duck under heavy, mournful branches
Decorated in fragile autumn leaves
Like so many brilliant orange faeries
Until I reach my destination:
An abandoned bridge to read under,
A coffee shop or candy shop,
Or just an empty lot to carve across

Sometimes I skate
As fast as I possibly can
Until the world blurs into a colorful blend
Of distractions, possibilities, ideas.

Until day turns to night,
Sunsets sparkle across the horizon like
Vivid necklaces of pink and red.
Until I lose track of time,
Lose track of myself.

This photo-poem combination suggests any number of writing possibilities. Some aspiring authors may want to describe one of their own favorite activities. Others may develop compositions in which they discuss a "journey" similar to the one Scherlis describes in her poem. Still others may choose to analyze the poem in terms of its colorful images, structure, and theme.

First published in Reflect and Write, "Skateboarding" is accompanied by four keywords and a direct quotation designed to inspire writing. The keywords Motion, Action, Confusion, Forgetting, suggest additional writing possibilities. A direct quotation by Tony Hawk leads to even more writing opportunities for sports minded students. "These sports are just—you go do it, and you're doing it on your own. You don't have to answer to anyone."

Although the dog in this photo was painted on a door, it still conveys the positive characteristics for which dogs are known. Written by Rose Scherlis, the poem "The Dog With No Name" emphasizes these qualities and expresses feelingsthat all dog lovers experience.

The Dog With No Name 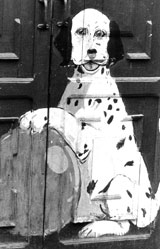 Your furry head peeked out from under the table
So I dropped some fried plantain for you to enjoy.

You lived on a banana field in Costa Rica
And it was wonderful, but the pesticides
For years underneath your delicate paws
Had twisted them until they grew like poison ivy
Bent in the wrong directions.

Your ear was tattered, a page in a book
With the corner folded down,
Signs of an ongoing war
With a world so menacing
When seen from way down there. But still your tail wagged
Like a stick in the hand of a drummer,
And your fur shone
Mottled with brown splotches, just puddles of mud
Surrounding your two copper eyes.

Best known as one of the original cast members of the television show Saturday Night Live, comedienne and actress Gilda Radner once wrote: "I think dogs are the most amazing creatures; they give unconditional love. For me they are the role model for being alive." Together with the poem-photo combination included in this article, this quotation helps to provide inspiration for the creation of any number of written compositions.

But that's not all. Following class discussion of the photo, poem, quotation, and such keywords as dog, loyalty, friend, and dedication, students may select other images of animals from any source to use as inspiration for their own writing. Then they may find appropriate quotations and keywords to add to their work. Finally, they may compile a class anthology using their combinations of images, poems, keywords, and quotations.

Next: Writers Find Inspiration in Paintings by Monet

"Skateboarding" and "The Dog With No Name" originally appeared in Reflect and Write: 300 Poems and Photographs to Inspire Writing by Hank Kellner and Elizabeth Guy (Prufrock Press, 2013). Photos by the author.