Students exercise the mental process of contrast every day.

But when it comes to using contrast in their writing, students don't seem to make the connections as easily as they do at other times. Fortunately, photographs can easily help students develop compositions using this pattern of organization. 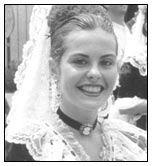 Using photographs similar to those shown here, students could develop papers that are organized in terms of the differences between the two women.

In their compositions, the students could discuss the differences in clothing, hairstyles, facial expressions, lighting, and even the jewelry the women are wearing. They could also speculate as to the period of time during which the photos were taken. 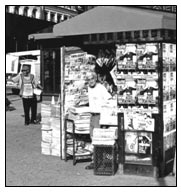 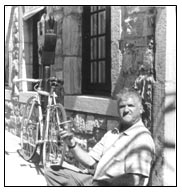 The two photographs of the men looking at the camera with what appears to be hostility offer many opportunities for students to write papers in which they point out the differences between not only the men, but also their environments.

And that's not all. Students could also use their imaginations to write about the men themselves: their backgrounds, the work they do, their hopes, aspirations and dreams.

Of course, it's possible to use photographs to inspire writing that isn't based on a specific pattern of organization. Photographs can be used to stimulate compositions based on example, process analysis, comparison, definition, classification, analysis, cause and effect, or any combination of these techniques. The following two photos support this idea.

Writing About a Lonely Man

Is the man shown in this photograph frustrated? Is he disappointed? Is he waiting for someone to arrive? Unsure of the future? Recalling an unhappy event? Neglected by his friends and family? Wishing that he were somewhere else? Wishing that he had done something differently?

Those are just a few of the many questions that can help even the most hesitant students overcome their reluctance to write. What's more, some students may choose to ignore the questions and create biographies of the man based on their imaginations. Others may write poems or stories from the point of view of the subject.

Farewell, conventional telephone! Hail cell phone! Did you know that in 2006 there were an estimated 219 million cell phone users in the United States? That said, one can't help speculating as to how many cell phones make their way into classrooms every day. And one can't help wondering if traditional phones will soon go the way of 78 rpm records and vacuum tubes for radios.

Using a photo as simple as the one shown here, you can easily inspire students to express their thoughts about traditional phones and cell phones. They could, for example, discuss whether or not telephones help people become closer in their relationships. They could discuss some of the positive and negative effects cell phones have on their users. They could write about some ways in which using cell phones can be annoying or even dangerous. They could tell how many times they talk on the phone each day. And they could even relate several of the most interesting telephone conversations they have had or overheard.

How Some Master Teachers Use Photographs

At the University of Mississippi Writing Project, Co-Director of Special Programs Allison Movitz's students use their own photographs to spark writings of various kinds. The students also incorporate their photos into autobiographical multi-genre presentations and portfolios. "Most recently," writes Movitz, "we've used Microsoft's Photostory™, a digital camera, and a microphone to re-create a 'who done it' from a mock trial in speech/debate classes."

Mary Birky is an English teacher at the Papillion-La Vista High School, Papillion, Nebraska; a Nebraska Writing Project Advisory Board Member; and a contributor to a forthcoming book on place-conscious education. Birky uses student-generated photos to stimulate writing assignments based on the content of the photos, the mood of the photos, and the imagery in the photos. "I tell my students to 'paint the photographs with words,'" she writes, before she asks them to create free-verse poetry based on the poetry they have selected.

Justin Van Kleeck's very successful writing activity with students he tutors involves a seagull that simply can't get enough Doritos. A former adjunct Assistant Professor of English at Piedmont Community College, Van Kleeck shows his students a video of a seagull that steals a bag of Doritos from a store in Scotland every day. In the first part of his assignment, he directs the students to become the thieving seagull and write process papers in which they tell their fellow seagulls how to steal, open, and eat the Doritos. In the second part of the assignment, he tells the students to write from the point of view of a shopkeeper who is telling other shop-keepers how to prevent the seagull from stealing Doritos in a creative, non-violent way. "The key to the exercise," writes Van Kleeck, "is for students to utilize the process approach while also using their imaginations."

The Addison Gallery of American Art

The Addison Gallery of American Art (addison.andover.edu) is a department of Phillips Academy, Andover, Massachusetts. When you visit you'll discover more about this organization's Photography and Writing Program, which is "designed to enable and inspire students to express themselves in words and photographs." Definitely worth a visit.

Next: Combining Photos with Poems