Can one picture inspire a thousand words?

"Words and pictures can work together to communicate more powerfully than either alone." —William Albert Allar, American Photographer

If 'One picture is worth a thousand words,' can one picture also inspire a thousand words? Of course it can. That's why educators are becoming increasingly aware of the power photographs have to unlock students' imaginations and help them express themselves through written language.

Whether you want to teach specific writing skills or simply to help students overcome their reluctance to write, you'll find that photographs are powerful teaching aids that can inspire students at all levels to create both expository and creative compositions. What's more, when you use photographs in your classroom, you can be as directive — or as non-directive — as you choose to be.

For example, you could show the below photograph to a group of students and ask them to let their imaginations guide them as they respond to it in writing. But if you want to be more directive, you could ask them such leading questions as: What is the woman in the photo thinking? Why is she standing alone in this scene? What does it feel like to wait for someone who is late? What kind of a family does this woman have?

You could even use short poems to complement photos that help to initiate responses from students. Here's an example of one such poem that worked well with this photograph at the middle school, high school, and community college levels. 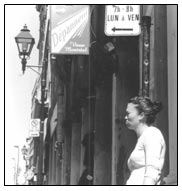 Many educators who have used photographs successfully in the classroom are eager to share their photowriting experiences with other professionals. At Piedmont Virginia Community College, former Adjunct Assistant Professor Justin Van Kleeck showed his students a photo of a baby macaque and a pigeon who had "adopted" each other as friends. "I asked the students to freewrite after showing them the photo and giving them information about how the animals came together," he writes. The students wrote about everything from how different species can get along so easily while humans cannot, to the human behaviors that stress animals, such as poaching," he concludes.

At the Prairie Lands Writing Project, St. Joseph, Missouri, Teacher Consultant Mary Lee Meyer asks her high school students to write "I am From" poems based on photos that are significant to them in terms of their lives. To support this activity, she asks such questions as Where are you from? Who are/were your grandparents or great grandparents? What occupations did some of your ancestors have? Meyer has also used this exercise at a writing institute for teachers. You can also find a great deal of valuable information about teaching writing at Meyers' blog.

How creative can you get with photographs of bridges? Ask Diane Sekeres, who conducted a workshop for teachers at the University of Alabama's Longleaf Writing Project Summer Institute for Teachers. "I found about 20 pictures of different kinds of bridges: rope, draw, suspension, destroyed, over gorges, over highways, over water," she writes. "Then I asked the teachers to study the photos and select one that was a metaphor for their teaching." At the conclusion to the exercise, the teacher-students wrote about their choices and their reasons for making them.

Another outstanding example of how a teacher uses photographs to inspire writing comes from Iowa Writing Project Director James Davis. First, Davis asks his students to recall a photograph of some significance to them. Then he directs them to describe the photograph as they remember it. "Who is in the photograph?" he asks. "What are their expressions and stances? What are the important details of the setting?" To conclude this assignment, Davis asks the students to find the photograph they described and study it carefully before writing about any discrepancies between the photo as it exists and their memories of it. "Why might these discrepancies exist?" he asks. "Which version has more to do with truth?"

When he's not busy editing Star Teaching — Frank Holes, Jr. teaches at Inland Lakes Middle School, Indian River, Michigan. Holes shows his students photographs of children performing daily activities and asks them such questions as Who is the child? What is his/her name? What is the subject's family like? How old is the subject? What is he or she feeling? "I also ask the students to give a full description of the setting that includes sense impressions," writes Holes. Then he asks questions related to a possible plot before he directs the students to write a story that places the child in the setting.

"To spur on students who are afraid to write, or intimidated by the writing process," writes Derri Scarlett, "I have them take pictures (or bring in pictures) that they like. An English instructor at Bismarck (N. D.) State College and a columnist for The Bismarck Tribune, Scarlett then encourages those students to talk about why they like the photos, or what the photos mean to them. Then she directs the students to "brainstorm" on paper. That's when they jot down the words they first spoke of when they discussed the photographs. From that exercise come sentences, then an essay. "Because the students have invested themselves in the subject matter," concludes Scarlett, "this is a great way of easing into the writing process."

Often maligned but never out of sight, visual images surround and captivate us without letup. Show a photograph to a child, and the youngster will point to it, trace its image, and respond with a variety of emotions. Show another to an adult, and you get a frown, a smile, or a gesture — rarely will you draw a blank. Show a photograph, or a series of photographs, to students at any level, and you'll generate more responses than you can handle. Soon your students will be creating stories, poems, and essays that will make you wonder why you hadn't used this simple and obvious technique years earlier for stimulating the creative process.

Next: Less is More